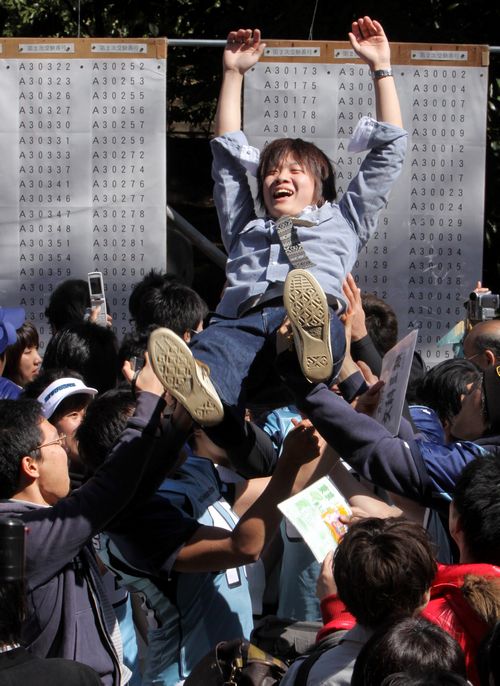 At US$28,000 a year, a popular English language cram school course in Japan doesn't come cheap, but its students hope the rewards will more than make up for the hefty tuition fee.
The class is called "Route H" - short for "Route to Harvard."
Hundreds of schools like it have opened across Japan in recent years to prep a new generation of students who have their educational sights set far beyond Japan's shores, at the top universities of the West.
"In future I hope to become a doctor or a lawyer. I can't make up my mind," said one high school student on a recent study night, taking a short break between English grammar exercises and vocabulary drills.
But one thing he is sure about: he wants to go to Yale University where he expects a more pro-active learning environment than in Japan, one that stresses lively debate and independent thinking.
"I don't like the Japanese education system of passively listening to lectures," he said.
More and more Japanese parents and students are thinking the same way, said Masanori Fujii, of the cram school company Benesse Corp, which offers customized "Route H" courses at an average of 2.5 million yen (US$28,000).
"Most of them are high school students and their parents, but some are parents of ninth graders, eighth graders or even sixth graders," he said.
While many families across Asia who could afford it have long sent their children abroad for an English-language education, Japan now lags behind India, China and South Korea in sending students to U.S. universities, according to the U.S. Institute of International Education.
But the tide is turning, said Fujii, with a new wave of students worried that a Japanese-only education will leave them ill-prepared in an increasingly globalised world.
"The recent trend is different from the past in that top students are hoping to leave Japan," he said.
Of the 10,000 top high school students who took a mock university entrance exam last year, five percent were also hoping to apply to prestigious U.S. and British universities such as Yale, Princeton, Oxford and Cambridge, Fujii said.
Their number is set to rise in future as the government is planning to introduce English-language education at elementary schools from 2011.
While the percentage may not seem huge yet, it has ended the virtual monopoly Japan's universities once enjoyed over the best and brightest academic talent, putting some educational institutions on the defensive.
In 2005, the elite University of Tokyo for the first time teamed up with other hallowed learning institutions for a national tour to recruit high school students in provincial cities.
The university wanted to remind young Japanese that "there are many Japanese colleges which offer education and research as good as that of foreign universities or better," the university said in a statement.
Tokyo University also said it would aim to strengthen education in English, "an international language in the academic world."
"Japanese universities are under pressure to improve their quality of education in an increasingly globalised world," said Hideo Kageyama, professor of education at Ritsumeikan University in Kyoto.
"It's also difficult for Japanese universities to attract smart students from Asian countries such as China and India. Japan should discuss how to improve education with the view that it is competing with other countries on the educational front."
Cultural purists worry about the rush for English and a Western education.
A "fervor for education in English without a national strategy is a recipe for the decline of Japanese," wrote novelist Minae Mizumura, who recently caused a stir with her essay "When the Japanese language goes extinct."
"We already have a solid translation culture in which almost any kind of intellectual dialogue can be read and spoken in Japanese," she said.
"But if everyone tries to speak English, the richness of Japanese could be reduced to a local language in which no intellectual conversations take place."
Yukio Otsu, a linguistics professor at Keio University, agreed that "not all Japanese have to speak English."
But he added that "it's natural to choose a university in an English speaking country if a top school of your specialized field happens to be there. And one's mother tongue doesn't disappear that easily."
Masayasu Morita, executive supervisor of the "Route H" course, said exposing more Japanese students to foreign universities would enrich, not threaten, the educational environment at home.
"This kind of competition between colleges across borders could contribute to improving the quality of Japanese education," he said.