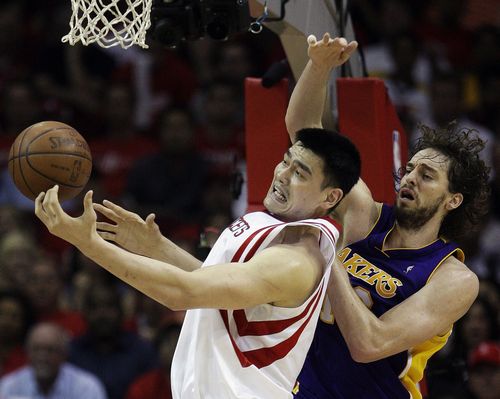 Chinese superstar center Yao Ming's broken left foot could be a "career-threatening" injury, the team doctor for the NBA's Houston Rockets told the Houston Chronicle on Monday.
Tom Clanton told the newspaper that the 7-foot-6 giant's decision on what sort of treatment he wants to fix the break could see him miss the entire 2009-2010 NBA season or have the potential to risk his career.
"At this point, the injury has the potential for him missing this next season and could be career threatening," Clanton told the Chronicle. "One of the things we are trying to get is a consensus opinion on that, to make certain there is no option we are overlooking that would provide an earlier return or would be an option for treatment that he would prefer rather than doing additional surgery."
Yao is planning to meet with several specialists to consider all possible alternatives regarding his fourth bone injury in as many years.
Clanton would not say what his advice would be but said Yao could try again to immobilize the foot to hope the fracture heals on its own.
"I don't think that is necessarily a longshot," Clanton said. "It takes a lot of time. It may be best to take more time. Sometimes that is the best option."
Several previous Yao bone injuries have been solved that way and doctors hopes this one would as well but last week it was learned that the injury has not healed and that Yao would be sidelined indefinitely.
But Clanton said the injury had grown worse instead of improving when examined under a CT scan last week.
Doctors will reexamine Yao to determine if there has been a reduced supply of blood in the area, which would hinder healing.
"The hairline fracture that is present in the previous X-rays shows evidence it has not healed and has extended across the bone," Clanton said.
Surgical options would include inserted a metal pin inside the foot, a bone graft or possibly rebuilding his arch, an option similar to one used on Cleveland Cavaliers center Zydrunas Ilgauskas of Lithuania.
"It's more that's what we're hoping to avoid but that's certainly a realistic situation given his injury and the way the bone looked on the CT scan," Clanton said. "The fact he is having no symptoms gives us reason for optimism."
Yao suffered the injury in a 108-94 home playoff loss on May 8 against the eventual NBA champion Los Angeles Lakers.