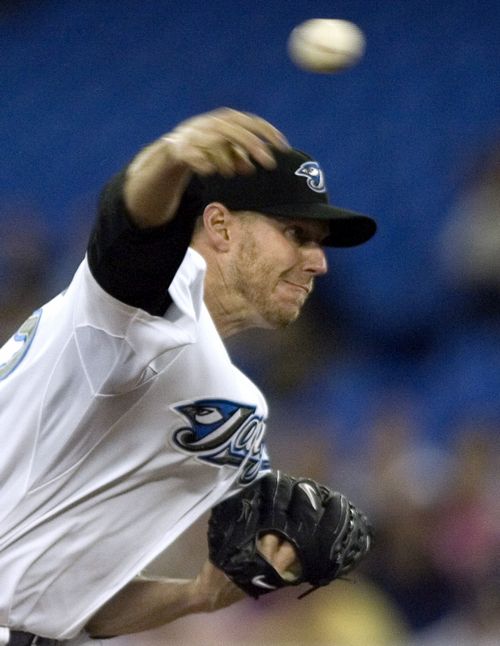 Carl Crawford and Pat Burrell homered as Tampa Bay ruined Roy Halladay's return with its sixth straight victory, a 4-1 win over Toronto on Monday night.
Halladay came in having won his past seven decisions, the longest streak in the majors, but lost for the first time since April 21. The Blue Jays have lost three straight.
He was starting for the first time since June 12, when he left two pitches into the fourth inning against Florida with a sore groin. Halladay allowed two runs and five hits in six innings, walking two and striking out seven.
Jeff Niemann won his third straight decision, allowing one run and four hits in 7 1-3 innings.
Randy Choate got the last out for his fourth save in as many chances.
The Rays touched Halladay for two runs in the third on B.J. Upton's leadoff walk and Crawford's seventh homer.
Tampa Bay tacked on two runs in the seventh against Jeremy Accardo when Burrell led off with a homer and Upton hit a sacrifice fly.
Angels 5, Rangers 2: At Arlington, Texas, Juan Rivera and Kendry Morales hit back-to-back home runs that helped the AL West-leading Los Angeles Angels to their sixth straight win.
The first five Angels reached to start the sixth against Vicente Padilla. After Vladimir Guerrero's leadoff single, Rivera and Morales homered to put Los Angeles up 4-2. Chone Figgins drove in another run with a sacrifice fly.
The Rangers have lost eight of 11, a slide that cost them the division lead they had held since May 5.
Rookie right-hander Sean O'Sullivan allowed consecutive homers to David Murphy and Marlon Byrd in the third, but no other runs in his six innings.
Brian Fuentes worked the ninth for his major league-best 22nd save.
O'Sullivan, in his third major league start, struck out five and walked two.
In other games: White Sox 6, Indians 3; Royals 4, Twins 2; Giants 10, Cardinals 0; Astros 3, Padres 1; Brewers 10, Mets 6; Cubs 3, Pirates 1; Marlins 4, Nationals 2