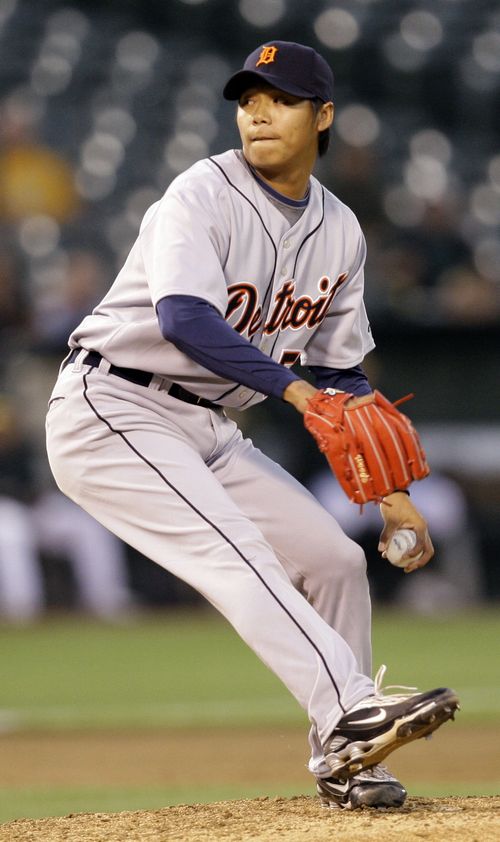 Taiwanese sidearming lefty Ni Fu-te yesterday made his Major League Baseball debut as a reliever for the Detroit Tigers during a game versus the Oakland Athletics, making him the sixth major leaguer from Taiwan, and the first Taiwanese pitcher in the Tigers' history. He is also the first local baseballer to have made the jump to the MLB after starting his career in Taiwan's pro league Chinese Professional Baseball League.
Replacing the Tigers' starter Rick Porcello at the bottom of the fifth inning when the team was trailing 0-5, the 27-year-old Ni, a Chiayi native, struck out the first batter he faced - former New York Yankees' Jason Giambi. Ni then forced Kurt Suzuki to hit a flyball to finish the inning.
Ni continued to face A's batters in the sixth, gave up a long solo home run to Ryan Sweeney, who went down and drove a low pitch. But it was the only hit he allowed in 1 2/3 innings and he struck out three, showing the ability to challenge hitters and throw strikes. Ni didn't walk anybody and threw an average 91 mph fastballs. He left the game with an 5.40 ERA. The Tigers ultimately lost 7-1.
Prior to the game, through his interpreter, Ni said, "I'm pretty happy about this. I hope I can play here and have a good performance here."
The performance signalled a great start to his MLB career. Ni also holds an interesting record of having the shortest name of any Tigers player ever.
The Tigers signed the sidearming lefty to a Minor League contract this past offseason out of the Chinese Professional Baseball League and invited him to Spring Training before putting him in the bullpen at Triple-A Toledo. Before joining the Tigers, Ni was previously drafted by another CPBL team Brother Elephants in a special draft held by the end of 2008 after his team ChinaTrust Whales was disbanded, but he declined his option to join the team.
Ni is the second Taiwanese ever signed by the Detroit Tigers, the first being 20-year-old outfielder Tang Chao-ting.
Ni was arguably the most effective reliever for the Mud Hens over the course of the season so far, going 3-0 with a 2.60 ERA in 24 appearances. He allowed 31 hits over 34 2/3 innings with nine walks and 32 strikeouts. Left-handed batters hit just .184 with one home run against him, thanks in part to an improved breaking ball, according to bullpen coach Jeff Jones.
Prior to Ni's MLB debut, Tigers' manager Jim Leyland said that he will "give him a shot. See what he looks like. We'll use him to get some lefties out."