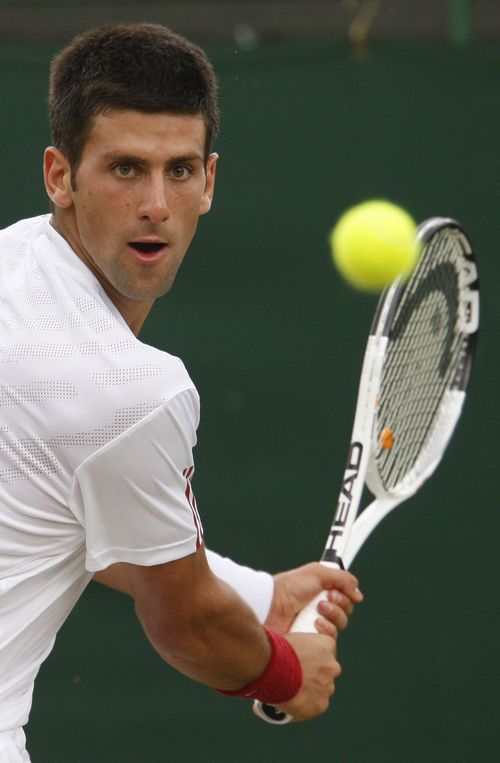 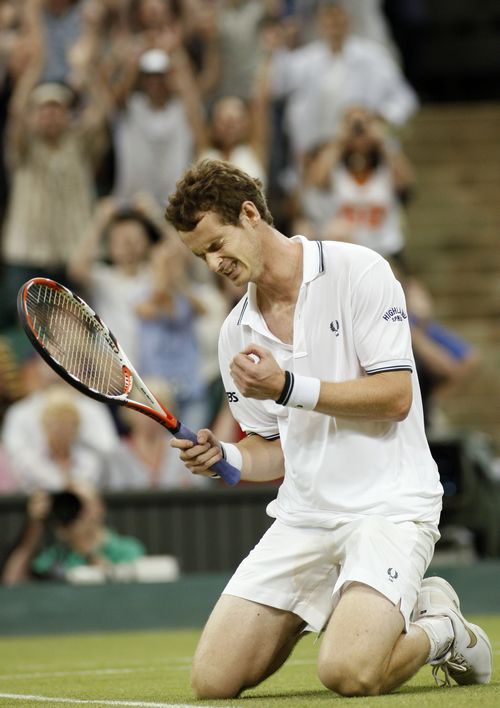 Andy Murray marked the first appearance for a competitive match of Wimbledon's 80-million-pound center Court roof by clinching a late-night five-set thriller on Monday.
The British third seed defeated brave Swiss 19th seed Stanislas Wawrinka 2-6, 6-3, 6-3, 5-7, 6-3 in a fourth round clash which ended at 10.39 p.m., the latest finish in Wimbledon history.
Murray, bidding to end Britain's 73-year wait for a home men's champion, stayed on course for a dream final against five-time winner Roger Federer who eased into his 25th Grand Slam quarter-final with a 6-4, 7-6 (7/5), 7-6 (7/5) win over Robin Soderling.
Murray will now tackle Spain's former world number one Juan Carlos Ferrero while Federer meets giant Croatian Ivo Karlovic.
Today's other quarter-finals will see 2002 champion Lleyton Hewitt take on two-time runner-up Andy Roddick while German veteran Tommy Haas faces Serbian fourth seed Novak Djokovic.
Wawrinka, an Olympic gold medalist in doubles at Beijing alongside Federer, was left to rue a host of missed chances which could have made him a straight-sets winner.
"It's very special to be in the quarter-finals but Stan played a great match," said Murray who basked in the support of 15,000 people beneath the new roof which had been closed earlier in the day because of rain.
"The standard he set at the start was very hard to keep up with.
"I had plenty of chances but I turned it around in the end. He came up with big shots and in five-set matches, the momentum always shifts."
Federer clinched an 11th win in 11 meetings with Soderling earlier in the day when the roof was open and temperatures reached a scorching 35oC.
In a repeat of the French Open final, where Federer claimed a record-equalling 14th Grand Slam title, the great Swiss on Monday won 6-4, 7-6 (7/5), 7-6 (7/5).
Federer, chasing a sixth Wimbledon title, now faces Karlovic, who fired down 35 aces in his 7-6 (7/5), 6-7 (4/7), 6-3, 7-6 (11/9) win over Spanish seventh seed Fernando Verdasco.
"Today was really a serving contest, there weren't many rallies so it's hard to judge these kind of matches," said Federer who broke the Soderling serve just once.
Karlovic, the 22nd seed, has now amassed 137 aces in four rounds and will be playing in his first Grand Slam quarter-final. He has yet to face a break point.
Digging deep
Australian Hewitt came back from two sets to love down for the fifth time in his career to beat Czech 23rd seed Radek Stepanek 4-6, 2-6, 6-1, 6-2, 6-2 while Roddick saw off Czech 20th seed Tomas Berdych 7-6 (7/4), 6-4, 6-3 to make the last eight for the fifth time.
"It's always tough to come back from two sets down. I had to dig deep, not look too far ahead and find a way to win," said Hewitt who needed treatment on his left thigh at the end of the second set.
Germany's rejuvenated Tommy Haas, the oldest man left in the draw at 31, reached his first Wimbledon quarter-final with a 7-6 (10/8), 6-4, 6-4 win over Russian 29th seed Igor Andreev.
"I served extremely well. I didn't give him many opportunities or the confidence for him to break me," said Haas.
"I'm having a fantastic run and I'm really pleased to be in the quarter-finals."
Haas, seeded 24, and who saved two match points in his third round victory over Croatia's Marin Cilic, next faces Djokovic who put out Israel's Dudi Sela 6-2, 6-4, 6-1.
Haas defeated Djokovic to win the title at the Halle grasscourt tournament in the run-up to Wimbledon.
Former French Open champion Ferrero became the first wildcard since Goran Ivanisevic in 2001 to reach the last eight with a 7-6 (7/4), 6-3, 6-2 win over French eighth seed Gilles Simon.
Famously, Ivanisevic went on to take the title eight years ago.