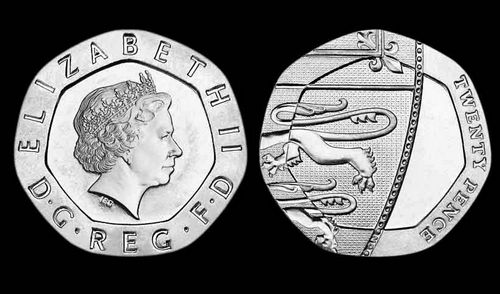 An error by the Royal Mint in Britain has seen the issue of tens of thousands of 'dateless' 20 pence coins - driving their value up to 50 pounds (US$80) each, a collector said Monday.
There are believed to be between 50,000 and 200,000 of the coins, worth US$0.33, in circulation, all of them missing the stamped 2009 date which was supposed to appear on the back of the coin.
It was the first time an undated coin has entered circulation in more than 300 years - the last such error occurred in 1672 under the reign of Charles II.
Describing the mistake as "incredibly rare," the Royal Mint - the institution responsible for making Britain's notes and coins - said the error occurred last year during a redesign of every denomination of coin.
The old 20 pence coin had the date on the front of the coin, but the updated version was supposed to shift the date to the other side.
However, the coins were minted using an old version of the side of the coin featuring Queen Elizabeth II's head which does not carry the year.
The London Mint Office, a private company specializing in collectable coins which has no link to the Royal Mint, is now offering anyone who has one of the dateless coins the chance to cash in, and he is willing to pay up to 50 pounds.
Nick Hart, a spokesman for the London Mint Office, said: "Mistakes like this not only fascinate people but also have considerable value and increase the significance (of the coin)."