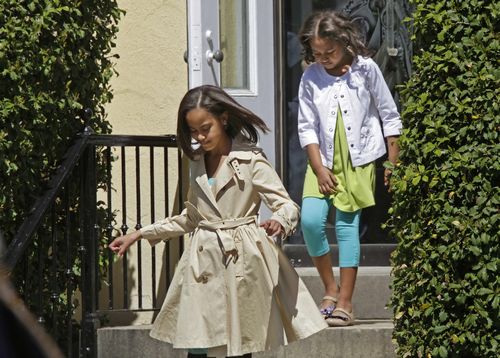 President Barack Obama's face brightened as he looked up and saw his 8-year-old daughter Sasha on the White House's Truman Balcony. He gave an exaggerated wave, she waved back and photographers captured a rare, unscripted moment.
It seemed innocent enough, yet White House officials asked news organizations not to distribute the image. Weeks later, when Obama took his daughters for ice cream the Saturday before Father's Day, photographers were permitted to provide family friendly pictures to cable news networks and newspaper front pages. The popular Parade magazine put a candid shot of the first family on its cover the same weekend, illustrating an article about fatherhood that the White House had suggested.
The two events reflect both the first family's insistence on raising their young daughters away from the spotlight of the White House and their penchant for carefully using them to bolster the president's political image.
"He's going to try to have it both ways until and unless people start to question his value system and his sincerity in playing that role," said Gerald Shuster, a political communications expert at the University of Pittsburgh.
There haven't been children this young in the White House since the Kennedys nearly 50 years ago. Pictures of Caroline and John went hand-in-hand with the image of youthful vibrancy that administration was trying to project. There's a reason why politicians from the local dogcatcher to potential presidents like pictures of kids - the young, non-misbehaving kind. They're political gold.
Yet even during the Kennedy administration, first lady Jacqueline didn't like the children being photographed, and a picture taken outside the White House of Caroline and her pet pony infuriated the first couple, said Dennis Brack, former chief of the White House News Photographers Association.
Images are great when they can be controlled. And when it comes to the Obama kids, the White House can be very controlling.
Sasha and her 10-year-old sister Malia have been shielded carefully from the public, but they are by no means invisible.
"If the children are participating in official events with the president and first lady, then they're part of the first family," said White House press secretary Robert Gibbs. "But when the children are alone, or when the president and first lady are in their roles strictly as mother and father, there should be a wide berth of privacy extended to the family."
Protecting the children in their new fishbowl life was a learning process for the Obamas. The girls answered questions, with their parents, during a soft interview for the TV show "Access Hollywood" last summer. Obama later said he regretted setting that precedent, and they haven't been interviewed since. But the interview came just as Obama was kicking off his general election campaign and the girls no doubt helped cement in the public mind an image of Obama that campaign officials relished.
During NBC's recent "Inside the Obama White House," the family turned down the network's request to film the girls. NBC showed tape of Obama cheering on the sidelines at Sasha's soccer game; photographers complied with a request not to shoot her playing.
The administration asks that no pictures be taken at the White House of the girls unless they're at a public event; the residence and the outside grounds are off limits. Those were the boundaries they were trying to protect with the lawn and balcony photos.
The White House has made available a handful of images of the children online through its own photo service on the FlickR website, showing them playing on the new swing set, walking their dog Bo or giggling with dad. It's primarily an attempt to control paparazzi by eliminating their market, Gibbs said.
Gibbs adds an extra layer of control by posting only low-resolution pictures. So if a magazine or other publication wants to use a family photo, they'd have to specifically ask the White House for a better-quality version. Gibbs has refused some of those requests, in effect becoming an editor. The Parade magazine photos, for instance, were all provided by a White House photographer.
It illustrates the fine line politicians dance upon with families, said John Matviko, editor of "The American President in Popular Culture."
Matviko noted last summer how Republicans admonished reporters for prying into Bristol Palin's pregnancy while the family of vice presidential candidate Sarah Palin was prominently on display at the Republican convention. "Either the children are out of bounds, and you don't put them in the photo ops, or you don't complain when somebody wants to talk about them," he said.
There is some discontent among White House photographers about the administration's aggressiveness in putting out their own images while trying to restrict the work of professionals. News photographers may not be happy, but there's likely to be public sympathy for the Obamas' position. It seems the family is giving a lot of attention to how the kids are being raised, said Joe Kelly, co-founder of Dads and Daughters, an organization that promotes father-daughter relationships.