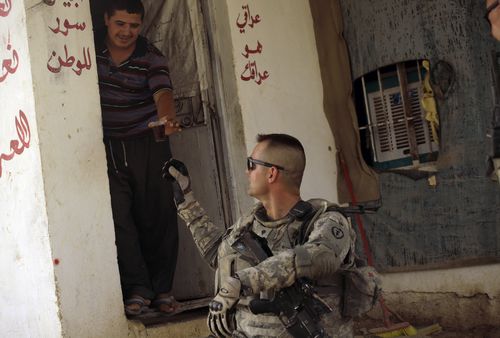 Iraqi forces prepared to take control of towns and cities nationwide yesterday as American troops finally withdrew in a milestone for the country's recovery six years after the U.S.-led invasion.
Baghdad's streets were quiet and traffic much lighter than usual as people stayed at home for a national holiday to mark the June 30 pullback, ahead of a complete U.S. withdrawal from Iraq by the end of 2011. Iraqis celebrated into the night but soldiers and police were out in force to prevent insurgent groups spoiling the party as American troops quit their posts in urban centers.
Iraqi President Jalal Talabani marked the security handover by thanking U.S. forces for the sacrifices they made in overthrowing now executed dictator Saddam Hussein in 2003, and in the years of violence that followed.
"They beared the burden and dangers against the most cruel regime and against the mutual enemy - the terror," Talabani said on state television.
The U.S. army announced that four of its soldiers died from combat-related on Monday, taking to 4,321 the number of U.S. soldiers killed since the invasion.
The pullout is part of a landmark security agreement signed last year between Baghdad and Washington covering the fate of the some 133,000 U.S. troops still in Iraq.
Security was tight in the the wake of several massive bombings that have killed more than 200 people this month alone.
All leave for security force personnel has been canceled and motorcycles, a favored form of transport for several recent bombers, have been banned from the streets.
"Our expectation is that maybe some criminals will try to continue their attacks," interior ministry operations director Major General Abdul Karim Khalaf said.
"That is why orders came from the highest level of the prime minister that our forces should be 100 percent on the ground until further notice."
On Monday, the former defense ministry building in the capital, taken over in the wake of the U.S.-led invasion, was handed back to the Iraqi government.
"This marks the end of the rule of the multinational force," said General Abboud Qambar, the head of Baghdad Operation Command.
It was a landmark celebrated by huge crowds of revelers in Baghdad's largest park on Monday evening.
Popular Iraqi singers including Salah Hassan, Kassem Sultan and Abed Falek, who all live abroad, returned home for the celebration.
"Since 2003, I have never been to a party but today I am coming to hear the singers I love," Ahmed Ali, 20, said. Revelers had to undergo three security checks to enter the park but no one seemed to complain amid a jubilant atmosphere, where an onstage banner declared that Baghdad's sovereignty and independence had been recovered.
Even policemen joined in the fun, dancing with the party-goers.
"Today is the day that we got back our country," said Salim Mohammed, from the sprawling Shiite working-class district of Sadr City. Prime Minister Nuri al-Maliki warned earlier this month that insurgent groups and militias were likely to step up attacks in the run-up to June 30 in a bid to undermine confidence in Iraq's own security forces.