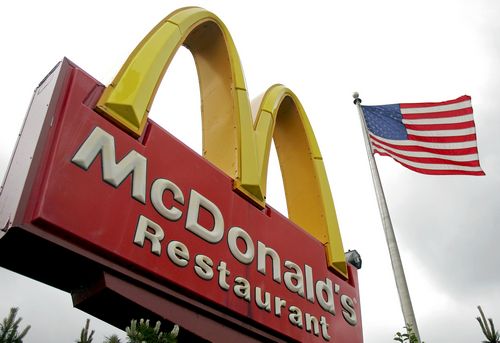 When my Native Sun News broke the story about the Custer figurine astride a motorcycle, packed into a McDonald's Happy Meal, most Native Americans - particularly the Lakota, Cheyenne and Arapaho - were not happy.
An extremely weak and calculated response from McDonald's came to the newspaper in short order. It read: "At McDonald's we value and respect people of all ethnicities, as well as their cultural history. The Night at the Museum: Battle of the Smithsonian Happy Meal features eight toys portraying different characters from the film. As with all Happy Meal promotions, our goal is to provide families a positive experience that can be shared by all." Say what? A positive experience? Who are they trying to kid? The response was signed by Danya Proud, spokesperson for McDonald's USA.
We would suggest that McDonald's do a little more research into the history of the characters they feature in their Happy Meals.
It is apparent by this historical gaff that someone at McDonald's either didn't know about the relationship between Lt. Col. George Armstrong Custer and the Indians or was too stupid to recognize it.
For the record, Lt. Colonel George Armstrong Custer, gained notoriety as an "Indian killer" while commanding the U.S. Seventh Cavalry. It didn't matter to him if the intended victims were men, women or children.
Too him they were just "Indians" and by killing as many of them as he could, his aim for a high political office would be greatly enhanced.
This is a historical fact that the researchers at McDonald's failed to see, or worse yet, failed to grasp. Apparently the propaganda spread by Hollywood and by books was quite effective in making a killer into a man to be loved and admired.
Suppose the "Night at the Museum" had featured a character in the movie named Adolf Hitler. Do you think McDonald's would have welcomed a figurine of him into their Happy Meals? No? Why not? The Jewish people would have come after them with hammers and tongs.
For those who do not know or understand history from an Indian perspective, Custer was the Hitler of the Plains. His cavalry murdered, pillaged and raped their way across Indian country in the late 1800s while he sat in the saddle and orchestrated the entire scene. His troops made coin purses from the scrotums of Indian men and ornaments for their saddle horns out of the vaginas of Indian women. It doesn't get more grotesque than that.
Corporate mentality
If the dimwitted historians at McDonald's consider this murderer to be some kind of hero, it is indicative of a corporate mentality that needs a serious revamping.
But let us not stop there with McDonald's. Rick Williams, the CEO of the American Indian College Fund, has been trying for years to get McDonald's to include Native Americans in the scholarship program that funds Hispanics, African Americans, and Asians. Not only do the high muckety mucks at McDonald's refuse to fund Indian scholarships, they even refuse to respond to the phone calls and written requests of Williams.
Why aren't Native Americans included in the scholarship program? According to McDonald's hierarchy, there are no Indians that hold franchises for McDonald's restaurants. Now whose fault is that? Can they sit there with a straight face and tell me that no Native American has ever applied for a McDonald's franchise?
In Rapid City, South Dakota, one of the most popular stops for the folks from the Indian reservations is McDonald's. Maybe the Indian schools should stop bringing their students to McDonald's by the bus load, and maybe the Indian parents should think twice before doing the same thing. Since Native Americans make up nearly 25 percent of the population West of the Missouri River in South Dakota, that could present a problem.
After the Native Sun News attempted to get comments from McDonald's corporate executives for the breaking story, suddenly all of the Custer dolls were pulled from the Happy Meals in Rapid City. The same thing happened in some communities in Oklahoma and New Mexico, states with large Indian populations. Surely someone at McDonald's was taken aback by this outrageous faux pas and ordered the removal of the offending figurines.
Last Thursday, June 25, was a legal holiday on the Indian reservations in South Dakota. It is a holiday because that is the day the combined forces of Lakota, Cheyenne and Arapaho, demolished Custer and his 7th Cavalry at the Little Bighorn.
The descendants of those warriors that fought and won this great victory over the U.S. Cavalry consider June 25 a day of celebration because the much hated Custer was sent to his maker on that day.
It is ironic that as the Lakota, Cheyenne and Arapaho celebrated this special holiday, figurines of the murderer they despised were still being packed into the McDonald's Happy Meals for the children of America to enjoy.
Tim Giago, an Oglala Lakota, is the founder and first president of the Native American Journalists Association and is now the publisher of the Native Sun News.