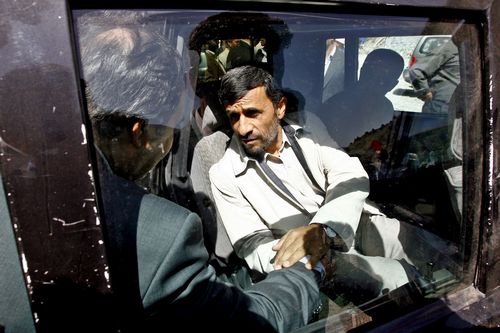 Iran upheld President Mahmoud Ahmadinejad's election victory despite massive opposition protests over what many branded a rigged poll that triggered the worst crisis since the 1979 revolution.
The country's powerful electoral watchdog confirmed on Monday the initial result of the disputed June 12 vote which gave Ahmadinejad a landslide victory over his nearest rival Mir Hossein Mousavi, after conducting a recount of 10 percent of the ballot boxes.
The streets of Tehran - the scene of widespread unrest in the aftermath of the poll, were quiet yesterday, with security forces withdrawing from their positions after being deployed Monday to prevent any outbreak of new violence.
The 12-member Guardians Council said it confirmed the results after a "thorough and comprehensive investigation" into the election, which had been denounced by Mousavi as a "shameful fraud."
"The majority of the objections were not deemed infringements or fraud and were only minor irregularities that occur in any election," Guardians Council chief Ayatollah Ahmad Janati said.
"Thus we confirm the result of the 10th presidential election."
But the United States warned that the decision may not placate the opposition, and Italy warned of possible further sanctions against Iran.
Mousavi boycotted the partial recount after lodging complaints of widespread irregularities, along with two other defeated candidates, former parliament speaker Mehdi Karroubi and ex-Revolutionary Guards chief Mohsen Rezai.
Mousavi and Karroubi came under fire from a top hardline cleric yesterday for opposing what he said was a "clean" election.
"Those who asked for the annulment of 10th presidential election are anti-revolutionary and against the regime," Ahmad Khatami told the official news agency IRNA.
Mousavi had sought a rerun of the election and staged massive public demonstrations in a dispute that has shaken the foundations of the Islamic regime, with unprecedented criticism of supreme leader Ayatollah Ali Khamenei.
According to the official results declared a day after the June 12 poll, Ahmadinejad won 63 percent of the vote against just 34 percent for Mousavi, a gap of 11 million votes.
"The validity of the 10th presidential election was confirmed," trumpeted a front-page headline in the hardline Kayan newspaper, while reformist newspapers largely played down the decision.
Ahmadinejad's victory and the ensuing crackdown on opposition protests triggered a global outcry and saw relations between Tehran and London deteriorate with Iran accusing Britain of stoking the unrest.
Iran is holding four locally recruited British embassy staff after releasing five others who were detained for their alleged role in the post-election riots.
British Prime Minister Gordon Brown slammed the arrests as "unacceptable" and demanded the immediate release of the four, while U.S. Secretary of State Hillary Clinton described Iran's treatment of the staff as "deplorable." She also said the limited recount was unlikely to satisfy the opposition in Iran.
"Obviously, they have a huge credibility gap with their own people as to the election process, and I don't think that's going to disappear by any finding of a limited review of a relatively small number of ballots," she said. Italian Prime Minister Silvio Berlusconi even warned of more sanctions against Iran, which is already under three sets of U.N. sanctions over its refused to halt sensitive nuclear work.