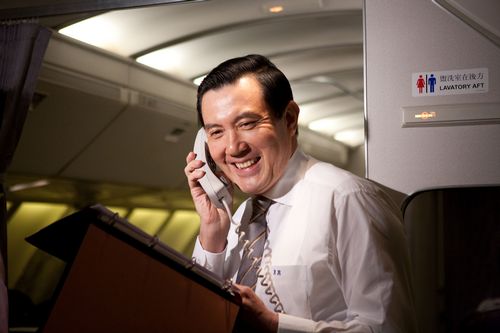 President Ma Ying-jeou arrived at San Francisco International Airport on the first leg of a shrunken seven day "Lasting Amity" visit to Panama and Nicaragua that had been originally planned to include a two-day state visit to Honduras.
The presidentially chartered EVA Air Boeing 747-400 "Combi" jet passenger and cargo aircraft departed Taiwan Taoyuan International Airport at 7:30 p.m. Monday for an 11 - hour flight to San Francisco International Airport, where it landed at 3:21 p.m. (6:21 a.m. yesterday Taipei time).
The Taiwan president was greeted by American Institute in Taiwan Chairman William Brown, Taipei Economic and Cultural Office in Washington Representative Jason Yuan and TECO San Francisco Representative Office Director-General Thomas Chen.
Ma, who resided at the San Francisco Airport Marriott Hotel, was not expected to engage in any public activities, but reportedly met or called several United States federal level political figures and local Bay Area politicians and would attend a banquet hosted by Bay Area overseas Taiwan groups.
The Taiwan president will leave Panama at 10:20 a.m. Friday and arrive in Managua at 11:00 a.m. and, after spending a day in the company of Nicaraguan President Daniel Ortega, board the EVA jet at 3:00 p.m. Saturday for the return journey through Honolulu and arrive back in Taiwan at 11:00 p.m. Monday.
Ma strolled into the rear cabin at close to 8:00 p.m. to greet the accompanying journalists and, while chatting with reporters, Ma acknowledged that missing one of the three countries "was disappointing."
However, Ma told reporters that "there will be another chance when the next president of Honduras is inaugurated in January."
Ministry of Foreign Affairs Central and South American Affairs Department Director Kuo Yung-liang told The Taiwan News that the MOFA had been monitoring the developing Honduran political crisis situation but saw no necessity to change the itinerary until the Sunday military coup that ousted President Jose Manuel Zelaya.
Ma broadcast a statement to the delegation about 7:50 p.m., or about 20 minutes after the Boeing 747-400 Combi took off from Taoyuan International Airport, in which he stressed that his frequent travel demonstrated in action his concern for Taiwan's formal diplomatic partners.
Besides jokingly complaining that the news coverage of the activities of the first lady during last month's swing through Belize, Guatemala and El Salvador "was far more than the news about me," Ma related the condensed itinerary and acknowledged that his state visit to Honduras had been cancelled at the last minute.
Ma lauded the Ministry of Foreign Affairs for its timely grasp of the changing situation in Honduras and its prompt implementation of contingency plans and smooth execution of "necessary adjustments" and expressed appreciation for EVA Air's service and cooperation.
The president said that the decision had been made "on one hand because their domestic situation is not suitable to receive visits by foreign guests and because we want to allow our embassy in Honduras and its staff to concentrate on taking care of our compatriots."
Ma stressed that "based on my understanding, all parties and factions in Honduras support the consolidation of our bilateral relations" and expressed confidence that the cancellation of his state visit "will absolutely not influence the friendship between our two countries."
"In the future, we will still have the option of visiting Honduras at a suitable time," the president stated.
Saying that the delegation was chosen to promote "comprehensive interaction" with the two diplomatic partners, Ma highlighted the presence of senior presidential policy advisor Chang Po-ya, nine KMT lawmakers including KMT Secretary-General Wu Den-yi, two city and county mayors and the Ju Percussion Group.