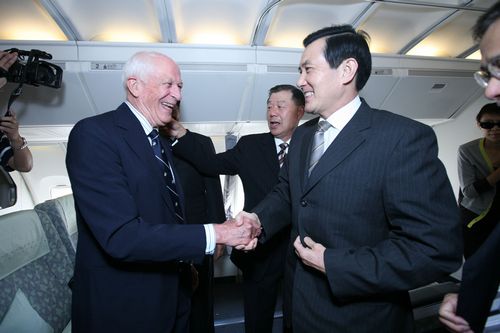 President Ma Ying-jeou utilized an one-night transit stopover in San Francisco to discuss Taiwan affairs with several United States politicians and influential foreign policy analysts, including former U.S. Secretary of State Condoleezza Rice.
Ma, who had been greeted with cheers and some jeers upon arriving at the San Francisco Airport Marriot Hotel where he spent an overnight transit before proceeding to Panama. Ma spent his day attending a banquet hosted by Bay Area overseas Taiwan groups and speaking with various U.S. politicians in or from his room.
The banquet, also held at the Marriot, was also attended by American Institute in Taiwan honorary chairman William Brown, who had met the president when his chartered EVA Air Boeing 747-400 Combi arrived at San Francisco International Airport. Brown stated that Ma had promoted Taiwan-United States relations and cross-strait relations and was leading Taiwan in the "right direction" in tourism, industrial and security policy.
For his part, the Taiwan president stated that, since last August, his Chinese Nationalist Party (Kuomintang) government had worked to improve cross-strait relations with the PRC and had simultaneously endeavored to improve ties with the United States, Japan and the European Union.
During their telephone conversation, Rice, who is now a professor of political science at Stanford University, expressed approval for his "great leadership" and policy of "reconciliation" with the Chinese Communist Party ruled People's Republic of China which she said had resulted in "huge" changes in cross-strait relations.
According to a presidential spokesman, Rice also said that Washington was "very hopeful" about Ma's expressed intention to carry out "surprise free" diplomacy.
Ma is scheduled to arrive in Panama City today for a three day visit during which he will attend the inauguration of Panamanian President-elect Ricardo Martinelli of the conservative "Democratic Change" party.