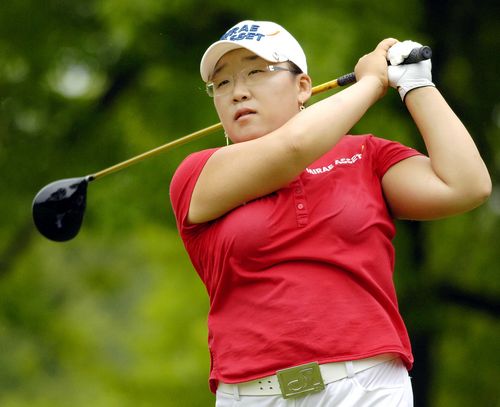 South Korea's Shin Jiyai rolled to a seven-shot win Sunday at the LPGA's Wegmans event, registering her fifth title in the past 11 months.
The 21-year-old rookie Shin fired a one-under 71 in the fourth round to reach a 17-under 271 and finish well ahead of Taiwan's Yani Tseng and American Kristy McPherson.
Tseng and McPherson finished in a tie for second at 10-under 278 after they both shot six-under 66 on Sunday.
Asian players dominated the leaderboard with five of the top nine players.
Besides Shin and Tseng, South Korea's Kang Haeji (fourth), Japan's Mika Miyazato (fourth) and South Korea's Yoo Sun Young (seventh) also finished in the top nine.
Rising star Shin posted her second win of the season and fifth since she was crowned British Women's Open champ last July.
In the past year she has also won the Mizuno Classic and season-ending ADT Championship last year and the HSBC Women's Championship in Singapore in March.
Cheyenne Woods, the 18-year-old niece of men's golf superstar Tiger Woods, missed the cut after completing a second-round 74.
The amateur finished at five-over 149 for 36 holes, four strokes off the cut line, in an event she entered by way of a sponsor exemption.