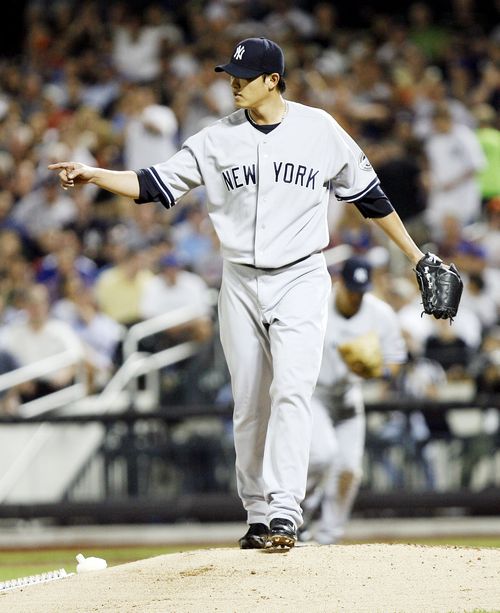 After a period of 379 days, New York Yankees starter Wang Chien-ming finally claimed his long-waited first win this season yesterday against the New York Mets as the Yankees defeated the Mets, 4-2 at Citi Field, completing a Subway Series sweep.
For a pitcher who once won a total of 38 games over two seasons, it felt like forever.
"I tried to keep the ball down and the sinker didn't go flat," Wang said. "I waited too long [for this win]."
The important win for Wang was sealed by Mariano Rivera, who claimed a high-profile 500 career saves yesterday, joining Trevor Hoffman (571) as the only pitchers to record 500 or more saves in Major League history.
Wang's first win this season came in his eighth start and it wasn't the finest 5 1/3 innings ever seen, but it could be the most important 16 outs of Wang's career.
Wang admitted the victory is the confidence boost he needed. His catcher, Jorge Posada understands the importance, too.
"No doubt about it," Posada said. "He's going to get going. The last three starts for Wang have been very good. Hopefully the win gets him going."
Wang pitched into the sixth inning for the first time this season and Yankees manager Joe Girardi continued to have a short leash on his starter. When Gary Sheffield reached second base after a sacrifice bunt by Fernando Tatis, Girardi made the decision to replace Wang with a one-run lead and one out in the sixth inning.
He threw a total of 85 pitches, the second-most in a start this season.
However, he didn't demonstrate his best sinker in the game. Wang said he thinks it was because he was moving his body too quickly during his rotation. That caused the sinker to elevate.
"We used different pitches," Posada said. "When he doesn't have the sinker, we still have to call it. But we used different pitches."
Girardi liked what he saw from Wang's slider and his ability to pitch around not having the location needed on his sinker. But he still walked three batters and went deep into counts against the Mets hitters, something Girardi said needs to improve.
"He's a contact pitcher," Girardi said. "You don't want to see him get into long counts."
The long-waited victory is a memorable one for Wang to celebrate - the first since his son was born earlier in the month. Wang said he planned to bring a ball home to commemorate the victory for his son, Justin, who was born on June 16.
Meanwhile, further good news for Taiwan's fans was recently announced as Detroit Tigers' Taiwanese lefty reliever Ni Fu-te was called up to the Major Leagues two days ago to join the Tigers pitching roster.
Ni is the sixth Taiwanese baseball player to achieve such success. Ni is a left-handed pitcher formerly with the China Trust Whales of Taiwan's Chinese Professional Baseball League. After the Whales were dissolved, Ni signed with the Detroit Tigers and began his career in U.S. minor league baseball.
After appearing in 34 games in AAA league, Ni has a 3-0 record with an impressive ERA of 2.60. Analysts think Ni will help augment what is generally considered the Tiger's weak bullpen. The Detroit Tigers (41-33) now lead the American League Central division.