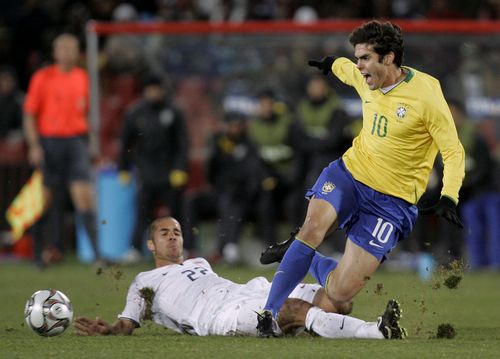 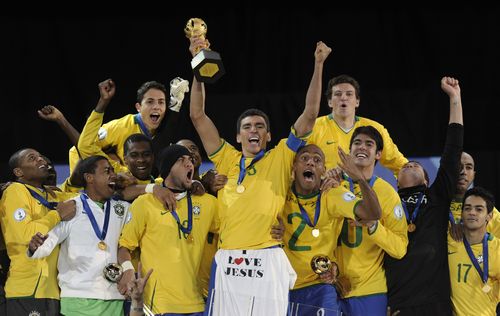 Brazil defended their Confederations Cup title on Sunday with a crushing come-from-behind 3-2 victory to inflict a cruel loss on tenacious underdogs the United States.
The five-time world champions looked out for the count after Clint Dempsey and Landon Donovan put the Americans two up at half-time but they bounced back with a Luis Fabiano brace drawing them level with 16 minutes left.
It set the scene for an exciting finale and captain Lucio made it a memorable night with a powerful header from an Elano corner with six minutes remaining.
The victory sparked wild celebrations on the bench with Brazil now having won a grueling seven games over the past 20 days - five at the Confederations Cup and two in World Cup qualifying.
It was their third Confederations Cup crown following triumphs in 1997 and 2005 and coach Dunga was a happy man.
"All the players were very concentrated on what needed to be done. I told them at half-time that we needed an early goal and to play the game we play. We wanted to win. We were very determined," said Dunga, the World Cup winning captain from 1994.
"It is difficult to overcome a 2-0 deficit but if you have committed players who always want to win then it is possible.
"If we can win this we can do much more in the future. I believe in these players."
Brazil had won 14 of their 15 previous encounters with the U.S. and beaten Bob Bradley's men 3-0 in the group stages. But since that match the U.S. fortunes changed dramatically.
After trouncing Egypt 3-0 to sneak into the knockout rounds on goals scored after finishing equal of points and goal difference with Italy, they shocked European champions Spain 2-0 in the semi-finals.
But their luck ran out against Brazil.
"That defeat really hurt," said Bradley.
"I'm extremely proud of my players, but it still feels pretty lousy to let this one get away.
"I hope though that people around the world see we have good team and great players and it is a big step forward."
On a cold winter's night, his giantkillers began in an attacking mood with Fulham's Dempsey making the first attempt on goal with a long distance strike that fizzed wide.
Brazil started feeding the ball to Maicon on the right and he lofted several crosses into the box that put the U.S. under pressure before Real Madrid's new signing Kaka, the man-of-the-match, glanced a header wide.
But it was the U.S. who stunned Brazil after 10 minutes.
West Ham's Jonathan Spector fed Dempsey with a defense-splitting through ball and the number eight cleverly put his shot under the diving Julio Cesar.
Brazil immediately charged back with Robinho attempting to angle a side-footed shot past Everton stopper Tim Howard but the United States kept up the pressure and Dempsey went close once again.
It was end to end stuff and Felipe Melo forced a fine save from Howard before the U.S. pounced again with a lightening quick counter-attack. The dangerous Landon Donovan picked the ball up in his own half and found the sprinting Charlie Davies on the left.
It was two against two and the U.S. came off better with Davies returning the ball to Donovan who crashed it into the net after 27 minutes.
Brazil looked hard for a way back but Howard was a rock and they went to the break needing something special.
Fabinao provided it seconds after the restart when he caught the U.S. napping, turning well from 17 yards to beat Howard and get his team back in the match.
Maicon had two good opportunities to draw them level as Brazil pressed with searching passes into the U.S. box, while Kaka saw a header go agonizingly close when Howard pushed the ball onto the bar.
The U.S. had lost composure and it was a desperate rearguard action with the equalizer inevitable. It came when Kaka crossed from the left and Robinho's shot hit the bar only for Fabiano to meet the rebound. Brazil were on a mission and it was no surprise when Lucio bagged the winner to break American hearts.
Earlier, Spain clinched the third-place playoff 3-2 in an extra-time thriller against South Africa with unsettled Liverpool star Xabi Alonso netting the winner.