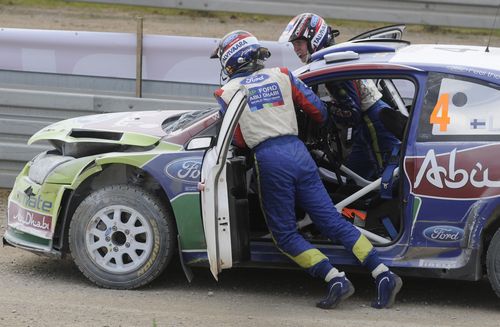 Finland's Mikko Hirvonen, driving a Ford Focus, won the Rally Poland race on Sunday, crossing the line 1min 10sec clear of Spaniard Dani Sordo's Citroen C4 to go top of the world championship standings.
Norway's Henning Solberg was third in another Ford Focus, 2min 5sec off the pace at a new race venue in Mikolajki.
Hirvonen's fellow Ford Focus driven by Finn Jari-Matti Latvala, who stood second overnight, earlier crashed out after he struck a barrel on a right-hand corner and drove into a metal barrier, damaging his front suspension.
"Despite the mistake by Jari-Matti, I'm still at the top of the drivers' standings, by one point, and it's the first time in my career that I've won two rallies in a row, so it feels fantastic," said Hirvonen, who won the Acropolis Rally of Greece earlier in June.
Hirvonen's ninth career win propelled him above previous championship leader Sebastien Loeb of France, who is chasing a sixth straight overall title this season.
"Now I want to win three in a row by winning in Finland," Hirvonen continued. "After everything that happened at the beginning of the season (when Loeb won the first five rallies), I never thought that I'd get to Finland at the top of the championship."
Citroen's Loeb gave himself too much to do as he embarked upon the five specials of the closing day over 19 minutes off the lead in 13th place, having smashed his car into a tree stump early on Friday.
Hirvonen, 28, and Loeb, who finished in seventh spot, will battle to the wire in a thrilling end to the campaign with four races remaining.