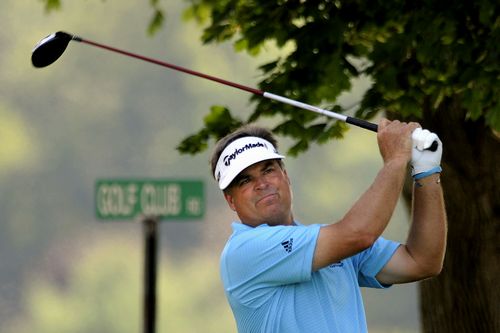 American Kenny Perry won the Travelers Championship in record fashion Sunday, rallying against a strong field to collect his 14th career PGA victory.
Perry, who has won 11 titles since turning 40, cruised to a seven-under 63 in the fourth round to win the US$6 million event by three strokes.
It was also his first win since losing at Augusta in a playoff to Angel Cabrera.
"Everyone kind of asks about the Augusta hangover," said Perry who had a bogey-bogey finish at the Masters. "I guess I kind of shoved that aside a little bit. So that makes me feel pretty good."
The 48-year-old vaulted past countryman Paul Goydos in the final round to finish with a tournament record 22-under 258 total at the River Highlands course.
Notah Begay held the previous record of 260 which he set in 2000.
Third-round leader Goydos (67) shared second place with David Toms (65) at 19-under 261.
Perry hopes this is a sign of bigger and better things ahead for him in 2009.
"I've won three last year, two this year already. Who knows? If I can get hot again, get on one of those streaks and sneak in two more by the end of the year."
Perry tied the course record on Thursday by shooting a 61 and led after the first two rounds. Perry said there was no way he was going to repeat his Masters meltdown.
"I knew that I had to keep making birdies," he said. "I wasn't going to let up. I wasn't going to play defensive golf. I learned something from that mistake."
Goydos missed a key birdie putt on the 17th hole as it rolled right of the hole "I don't want to run and hide from that," he said. "He played like a guy who's won 14 times. I played more like a guy who's won twice, especially early in the round."
Toms fired his third 65 of the event to finish at 19-under in a tie with Goydos. Hunter Mahan, Ben Curtis and Ryan Moore finished two strokes adrift of Goydos and Toms to tie for fourth.