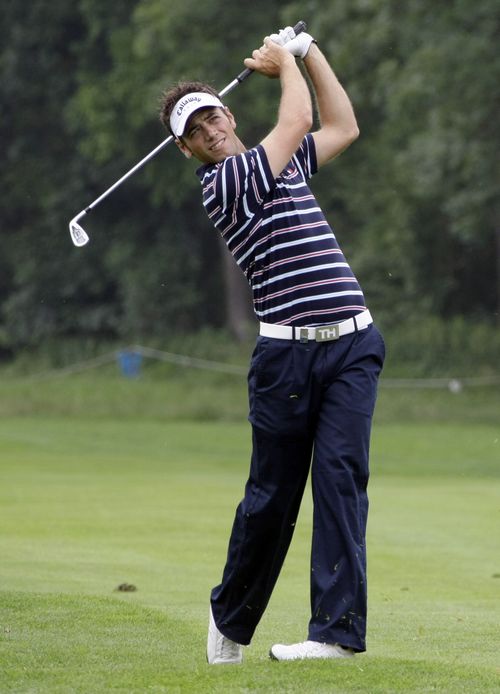 England's Nick Dougherty remembered his late mother after holding his nerve to claim the third European Tour title of his career at the BMW International Open on Sunday.
The 27-year-old looked on course for a comfortable victory at four shots clear with three holes to play, only for Argentina's Rafa Echenique to sink an incredible albatross on the last hole to move to within a shot of the lead.
It made for a nervy finish, but Dougherty kept his cool to clinch his first Tour title - and a winners cheque of just under 283,000 pounds - since the Alfred Dunhill Links Championship in October 2007.
Dougherty's career suffered a serious setback after he lost his mother Ennis to a heart attack aged 61 in April 2008 and he revealed that her memory had spurred him on.
"Since Mum passed away I haven't played great, it's been really tough," he said.
"I've been really patient though. My team has really helped me to get through. It's lovely to be back where I feel I should belong.
"I'd just like to say thanks to all the people who supported me. I think I showed that the strength of my mum lives on in me."
South Africa's two-time U.S. Open champion Retief Goosen had started the day with a two-shot lead before falling away, while home favorite and two-time Masters champion Bernhard Langer's quest to become the oldest winner of a European Tour event at the age of 51 also proved fruitless.
Dougherty flew out of the blocks, registering birdies on his first four holes to steal the lead from Goosen, only for the South African to sink a 14-foot eagle putt on the ninth to take him level with Dougherty with nine holes to play.
It was on the back nine, though, that the Liverpool-born world number 120 staked his claim for the title, sinking birdies on four of the first six holes to go four clear on 22-under.
Goosen finished with a 71 that gave him third place.