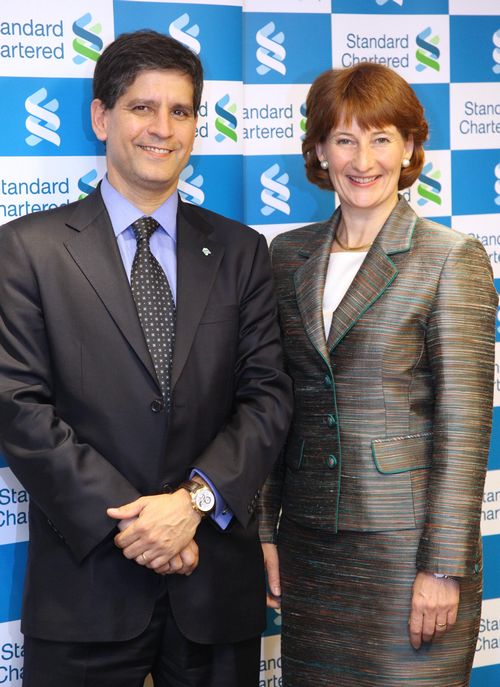 Asia will recover much faster than the West, and will be able to create a lot of demand, predicted Karen Fawcett, Group Head in Transaction Banking, Standard Chartered during an interview with the Taiwan News on June 9. Based in Singapore, Fawcett is responsible for end-to-end performance of Transaction Banking including cash management, trade services, securities services, and electronic channels.
Describing the economy now and before Lehman Brothers failed last year as "night and day," Fawcett's observation is based on the corporate transactions that she sees everyday.
"We began to see slowdowns in transactions in terms of less demand from the OECD markets last June," she said, "and there was a dramatic drop when the Lehman Brothers failed in September the same year."
"We began to see it coming back in February this year," she said, adding that the key question for everyone is: Is the upturn temporary or permanent?
"It is very difficult to tell; companies in Taiwan are not holding any inventory anymore, which means there must be some restocking going on, and it is the same in the States and Europe."
Despite the global recession, Fawcett maintains that Standard Chartered has gained market share over time, only the growth is slower than last year's.
More business opportunities are reasonably created after Taiwan and China established direct flights. Fawcett foresees possibilities more than just greater trade activities between the two.
The Taiwanese government is proactive about attracting regional treasury centers back to Taiwan, and she believes they are looking at some potential tax incentives.
She explained that Standard Chartered runs regional treasury centers for many global corporations, often in Singapore or Hong Kong, where the tax environment is very attractive. "We are working on how we can help Taiwanese corporations manage things regionally outside of Taiwan, get tax incentives and do regional cash management for them."
Fawcett believes this will be a big boost for Taiwan's economy as a whole, and broaden its economic ties with other countries beyond China. Nevertheless, she also agrees that demand from China is positive for Taiwan at the moment, as well as for other countries in Asia.
Joining the interview with Fawcett, Carl Wegner, the Head of Transaction Banking in Standard Chartered Taiwan, shared his experiences of working with Taiwanese companies over the past 15 years.
"I think Taiwanese companies are flexible, maneuverable and very inventive that they can always make things happen," said Wegner. "Taiwanese companies enjoy a high level of trust from their buyers. The relationship is kept for years, and not only in IT industries, but in traditional businesses as well."
"Having earned their buyers' trust allows local entrepreneurs to be successful," he said.
Standard Chartered established its first branch in Taiwan in 1985, and expanded to currently 94 branches. The acquisition of Hsinchu International Bank in 2006 was a step forward for the bank in Taiwan.
"Taiwan has not consolidated in the same way we have seen in other countries," said Fawcett, "Taiwanese banks have been resilient, resulting in a very competitive banking business."
The top five banks in Hong Kong or Singapore have 75% of market share, but in Taiwan the figure is only about 30%, said Wegner.
Referencing banking in other Asian countries such as Korea, Singapore and Malaysia, where bank consolidation is forced by their governments, Fawcett thinks that Taiwan's competitive environment is partially due to government policy.
"I think the Taiwanese government inclines to a more free market approach, which is why the country has been successful in some ways."