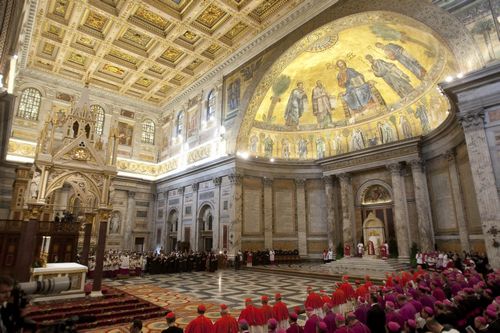 The first-ever scientific test on what are believed to be the remains of the Apostle Paul "seems to confirm" that they do indeed belong to the Roman Catholic saint, Pope Benedict XVI said Sunday.
It was the second major discovery concerning St. Paul announced by the Vatican in as many days.
On Saturday, the Vatican newspaper L'Osservatore Romano announced the June 19 discovery of a fresco inside another tomb depicting St. Paul, which Vatican officials said represented the oldest known icon of the apostle.
Benedict said archaeologists recently unearthed and opened the white marble sarcophagus located under the Basilica of St. Paul's Outside the Walls in Rome, which for some 2,000 years has been believed by the faithful to be the tomb of St. Paul.
Benedict said scientists had conducted carbon dating tests on bone fragments found inside the sarcophagus and confirmed that they date from the first or second century.
"This seems to confirm the unanimous and uncontested tradition that they are the mortal remains of the Apostle Paul," Benedict said, announcing the findings at a service in the basilica to mark the end of the Vatican's Paoline year, in honor of the apostle.
Paul and Peter are the two main figures known for spreading the Christian faith after the death of Christ.
According to tradition, St. Paul, also known as the apostle of the Gentiles, was beheaded in Rome in the 1st century during the persecution of early Christians by Roman emperors. Popular belief holds that bone fragments from his head are in another Rome basilica, St. John Lateran, with his other remains inside the sarcophagus.
The pope said that when archaeologists opened the sarcophagus, they discovered alongside the bone fragments some grains of incense, a "precious" piece of purple linen with gold sequins and a blue fabric with linen filaments.
On Saturday, the Vatican newspaper announced that a round fresco edged in gold featuring the emaciated face of St. Paul had been discovered in excavations of the tombs of St. Tecla in Rome. It was believed to have been dated from the end of the fourth century, making it the oldest known icon of St. Paul, meaning it was an image designed for prayer, not just art, L'Osservatore Romano said.
Monsignor Gianfranco Ravasi, presidente of the Vatican's culture department, said the discovery was an "extraordinary event" that was an "eloquent testimony" to the Christianity of the first centuries, L'Osservatore said.
Vatican archaeologists in 2002 began excavating the 8-foot(2.4-m)-long tomb of St. Paul, which dates from at least A.D. 390 and was buried under the basilica's main altar. The decision to unearth it was made after pilgrims who came to Rome during the Roman Catholic Church's 2000 Jubilee year expressed disappointment at finding that the saint's tomb - buried under layers of plaster and further hidden by an iron grate - could not be visited or touched.
The top of the coffin has small openings - subsequently covered with mortar - because in ancient times Christians would insert offerings or try to touch the remains.
The basilica stands at the site of two 4th-century churches - including one destroyed by a fire in 1823 that had left the tomb visible, first above ground and later in a crypt. After the fire, the crypt was filled with earth and covered by a new altar. A slab of a cracked marble with the words "Paul apostle martyr" in Latin was also found embedded in the floor above the tomb.