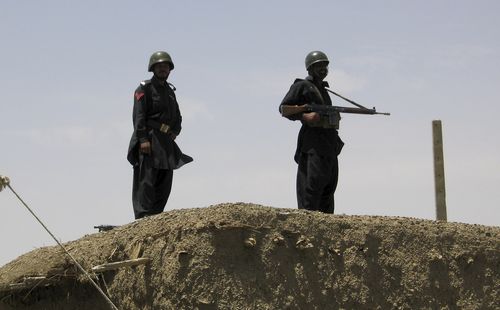 Pakistan ramped up its campaign against Taliban leader Baitullah Mehsud, placing a bounty on the chieftain's head and launching air strikes on his stronghold in the country's northwest.
The government has expressed its determination in recent weeks to eliminate Mehsud, who is viewed with increasing alarm in Islamabad as a major threat to security in the country. His group has been blamed for a string of suicide bombings across the nation that have killed more than 100 people in the past month.
The intensifying conflict between Pakistani security forces and Mehsud has been centered in North and South Waziristan - part of the mountainous tribal belt in the northwest - where the army appears to be preparing for a fresh offensive aimed at eliminating Mehsud and his militant network.
But the Taliban has not been cowed by the government's attacks, claiming responsibility for a strike Sunday that killed 12 soldiers in North Waziristan and vowing to continue its assaults if the military does not halt its operations.
On Sunday, the government upped the stakes in its battle with Mehsud, publishing an announcement in two national newspapers offering a 50 million rupee (US$615,000) reward for information leading to his capture or death. Smaller amounts were offered for information on his top lieutenants.
"The condemnable and cruel acts of these callous people are not only earning a bad name for Pakistan, but also for Muslims worldwide," the announcement said. "Such people are certainly killers of humanity and deserve punishment."
The U.S. State Department has already authorized a reward of up to US$5 million for Mehsud.