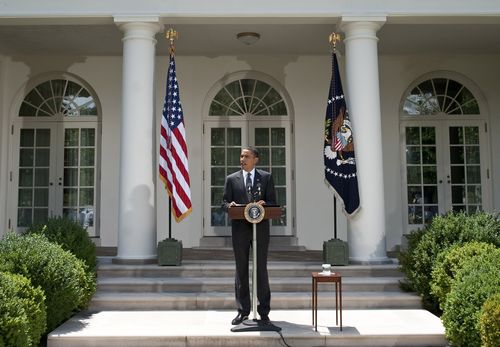 Facing a rare defeat, President Barack Obama put a big dose of political capital on the line and scored a major victory just when he needed one.
In private telephone conversations and last-minute public appeals, Obama leaned heavily on House Democratic holdouts to support the first energy legislation ever designed to curb global warming. The measure ended up passing in dramatic fashion.
In the end, the president's furious lobbying - coupled with a final push by allies including former Vice President Al Gore - carried much weight. To a certain extent, the victory validated Obama's governing style - and that could bode well for his other top domestic priority, health care. He faces an even more difficult test in shepherding the energy and climate legislation through the Senate.
Obama recognizes as much.
"Now my call to every senator, as well as to every American, is this: We cannot be afraid of the future. And we must not be prisoners of the past," Obama said in his weekend Internet and radio address. He scrapped his talk on his original topic, health care, and recorded the climate bill speech shortly after the Democratic-controlled House backed the measure on a 219-212 vote late Friday.
It was a win Obama certainly needed. Congress was getting ready for a weeklong holiday break and already health care was hanging in the balance. While his popularity remains strong, Obama's overall ratings have slipped a bit. Restive Americans also are wary of some of his proposals, including deficit spending as Obama pumps an enormous amount of money into the economy and elsewhere.
The narrow House victory margin suggests potential trouble ahead with the Democratic rank-and-file as the White House seeks to tackle more big-ticket issues in Obama's first year in office; health care tops the list.
As Congress tackles that contentious issue, Obama's left flank is beating up him and his allies over the effort to overhaul the costly and complex U.S. medical system. Moderate Democrats are looking to forge compromises to pass a measure; liberal critics are dug in over elements they want to see in any legislation. Liberal groups are running ads against senators who won't publicly support a government program to compete against private insurers.
Democrats have a comfortable House majority. But the climate legislation pitted Democrats who represent East Coast states that have been cleaning up their act against Democrats in the Mideast and other places that rely heavily on coal and industry. They have a longer, more expensive path to meet requirements in the measure.
Senate passage is far from certain, given that Democrats lack the 60 votes needed to cut off a likely filibuster - a legislative maneuver used to delay a final vote on a measure.
Obama's personal touch - and another dose of his political capital - will be required again.
White House senior adviser David Axelrod said Sunday on ABC television's "This Week" that he did not expect Senate action until the fall on climate legislation. "We're trying to solve a problem that has languished for a decade," he said.
"I hope it won't pass the Senate," Senate Republican leader Mitch McConnell said on "Fox News Sunday," claiming the measure would lead to "significant increases in electricity across America."
In the House, Obama was vindicated - at least for now - with his hands-off approach to accomplishing his legislative goals. He prefers to provide broad policy principles on his priorities, leaving the details to Congress.
He temporarily may have put to rest concerns expressed publicly by Republicans and privately by Democrats - that he's trying to do too much: so many policy changes in the midst of a recession and wars in Iraq and Afghanistan.
Obama has had a string of early successes, the US$787 billion economic stimulus among them.
The climate bill victory was different. It was grander. It had international consequences. It perhaps meant more to Obama than the others. After ignoring global warming for decades, most leading nations now agree it's an urgent danger. The U.S. public, too, has come to same conclusion in recent years. The House measure would, for the first time, limit the pollution blamed for global warming while signaling a new commitment to combating global warming. President George W. Bush gave the matter short shrift.
Remaking the energy industry and curbing global warming have been hallmarks of Obama's platform since he began his presidential campaign in 2007, if not before that.
Sensing the legislation was in trouble early last week, the White House stepped up its involvement.
First, Obama pressed the House to act during a news conference.
Then, the White House held a hastily arranged Rose Garden event Thursday that raised the stakes. Obama pleaded for votes, acknowledged the changed world view on the subject and stressed the opportunity at hand for the United States.
"The nation that leads in the creation of a clean energy economy will be the nation that leads the 21st century global economy. Now is the time for the United States of America to realize this as well. And now is the time for us to lead," he said.
A day later, after a flurry of phone calls from Obama to recalcitrant Democrats, the House spoke - and said it agreed.
Will the Senate?