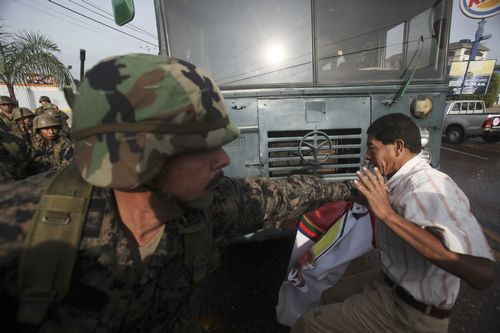 Soldiers ousted the democratically elected president of Honduras on Sunday and Congress named a successor, but the leftist ally of Venezuelan President Hugo Chavez denounced what he called an illegal coup and vowed to stay in power.
The first military takeover of a Central American government in 16 years drew widespread condemnation from governments in Latin America and the world - including the U.S. - and Chavez vowed to overthrow the country's apparent new leader.
President Manuel Zelaya was awakened Sunday by gunfire and detained while still in his pajamas, hours before a constitutional referendum many saw as an attempt by him to stay in power beyond the one-term limit. An air force plane flew him into forced exile in Costa Rica as armored military vehicles with machine guns rolled through the streets of the Honduran capital and soldiers seized the national palace.
"I want to return to my country," Zelaya said in Costa Rica. "I am president of Honduras."
Congress voted to accept what it said was Zelaya's letter of resignation, with even Zelaya's former allies turning against him. Congressional leader Roberto Micheletti was sworn in to serve until Jan. 27 when Zelaya's term ends.
Micheletti belongs to Zelaya's Liberal Party, but opposed the president in the referendum.
Zelaya denied resigning and insisted he would serve out his term, even as the Supreme Court backed the military takeover and said it was a defense of democracy.
He left late Sunday on a plane provided by Chavez, bound for Nicaragua where he was to attend a scheduled meeting of Central American presidents the following day.
Zelaya called on Honduran soldiers to back him, urged citizens to take to the streets in peaceful protests, but only a few hundred turned out at the main protests in the capital.