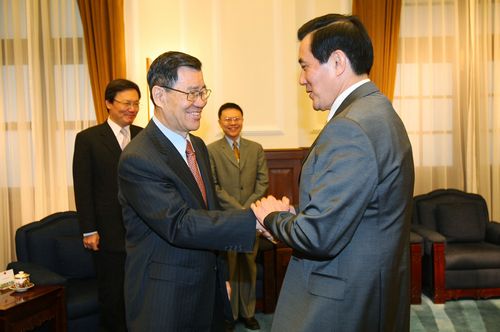 President Ma Ying-jeou decided yesterday morning to cancel a planned state visit to Honduras early next month in the wake of the overthrown of Honduran President Jose Manuel Zelaya by the Honduran military Sunday.
Zelaya, whose four year term was slated to end in January, was taken forcibly by military troops from the presidential residence in Tegucigalpa Sunday morning local time and expelled to Costa Rica after bitter controversy over plans to hold a non-binding referendum for constitutional change Sunday in an apparent effort to lift presidential term limits.
Ma had been scheduled to visit Honduras on Saturday and Sunday and issue a joint communique with Zelaya on future bilateral cooperation. Ma, together with a large entourage of business leaders, government officials and staff and local broadcast and print journalists, departed Taiwan Taoyuan International Airport at about 7:00 p.m. yesterday evening to attend the inauguration of Panamanian President-elect Richardo Martinelli of the conservative Democratic Change party tomorrow.
Ma will still make a two-day state visit to Nicaragua to meet with leftist Sandinista President Daniel Ortega, but will conclude his Central American trip after concluding the scheduled activities in Nicaragua.
The presidential spokesman announced yesterday morning at the Office of the President that "in view of the uncertain political situation in Honduras, the fact that the original purposes of the visit cannot be realized and in light of security concerns, President Ma has decided to cancel the planned two-day state visit to Honduras."
The spokesman stated that Ma and his entourage will fly directly to Hawaii after concluding the state visit to Nicaragua on Saturday and, after an overnight transit in Honolulu, return to Taiwan Taoyuan International Airport at 11.00 p.m. on Monday. The president was originally scheduled to conclude the nine day "Lasting Amity" excursion by returning to Taipei in the early evening of July 8.
The spokesman added that "we are absolutely certain that this cancellation will not influence our relations with Honduras as all circles regardless of political positions had expressed welcome for the president's visit and the desire to consolidate relations with the Republic of China."
The United States, the European Union, the Organization of American States and most other countries have condemned the coup. The spokesman related that the Office of the President and concerned agencies had been monitoring the changing political situation in the Central American nation, but had previously continued to plan for Ma's visit given that "all sides welcomed the president's visit."
Nevertheless, the presidential office had throughout the crisis prepared contingency plans and implemented such plans after news of the coup reached Taiwan Sunday evening. The office stated that the decision to cancel the two-day visit to Honduras was made by Ma about 10.00 a.m. on Sunday after receiving advice from "related agencies" in a early morning meeting.