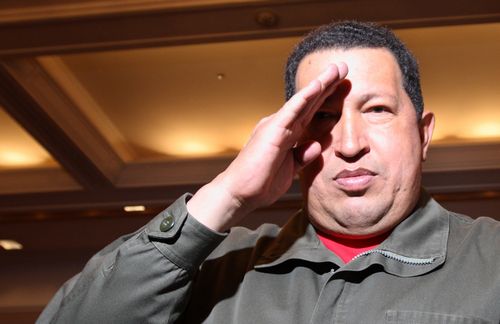 Just as oil-rich Venezuela sinks deeper into debt, Hugo Chavez, its flamboyant and megalomaniacal president, has crossed the line and can now quite accurately be called a dictator.
A rush of new orders and decrees in recent days is silencing critics, neutering political opponents, shutting down the last of Venezuela's independent media and purging the military of all but the most sycophantic officers.
Chavez's behavior is reminiscent of President Hosni Mubarak's heavy-handed approach in Egypt. About all that's missing is the political prisoners. But, like Mubarak, Chavez does not hesitate to attack his critics with utterly nonsensical allegations, apparently without the slightest care about how ridiculous it looks.
In Egypt last week, opposition politician Ayman Nour, just out of prison, announced that he would run for president again. As he left home the very next day, a man waiting for him on a motorcycle threw a fire bomb in his face. We had nothing to do with it, the government averred.
Chavez is not usually so violent, but he can be just as blatant. Two weeks ago his government announced that it would file charges against Guillermo Zuloaga, who owns Globovision, the nation's last standing independent television station. A week earlier, Chavez attacked Globovision, saying it had slandered one of his ministers.
"We cannot allow for the bourgeoisie, driven mad by hatred, to continue shooting a machine gun every day against the morals of the people," he said. "They have to pay that with jail." A few days later came the court charge.
What law had Zuloaga violated? He owns a car dealership and is storing some of the unsold vehicles at his home. Police "raided" his home and said they found 24 Toyotas on the property. Zuloaga explained that he was keeping the cars there because one of his dealerships had been robbed. He accused the government of trying to intimidate him. Chavez denied that, of course, and called Zuloaga a "gangster."
I am not an expert on Venezuelan law. But Zuloaga owns the dealerships, which includes the cars he has for sale. What business is it of the government where he chooses to keep them? You know someone has become an unrepentant dictator when he can drum up a charge like that and keep a straight face.
There's more. Much more. Chavez is pulling books off public library shelves that do not comport with his socialist goals - 60,000 of them, the Miami Herald reported.
Meantime, last week the government began distributing more than 2 million free books nationwide including "Social Movements in the 21st Century" and "Empire's Spider Web," an unflattering appraisal of U.S. foreign policy. Peruvian author Mario Vargas Llosa, speaking in Caracas last week, warned that "the threat in the area of liberties, freedom of expression and the press has increased significantly."
Undeterred, Chavez is following through on his threat to undermine elected regional governors from competing political parties. He is creating new administrative positions in those regions and handing off the governors' powers to his own bureaucrats.
Chavez proposes to call these people "vice presidents." Chavez has been on a gradual authoritarian path for many years. But until recently, much of his destructive energy has been focused abroad. He has used Venezuelan oil money to bestow gifts upon poor people in neighboring countries - even in the United States. But with oil prices down by more than 50 percent over a year ago, and the world's economy in recession, Chavez can no longer afford his foreign policy. By one reliable accounting, his "foreign aid" spending will drop by more than 90 percent this year.
What's a dictator to do? Nationalize companies. Make their income your own. Two weeks ago, the government seized control of a pasta factory owned by Cargill, the American food conglomerate. As the excuse, the government claimed that the plant was producing the wrong kind of pasta. It wanted Cargill to make larger quantities of a cheaper pasta sold at government-controlled prices. Failure to do so, the government said, was a "clear transgression of the law."
Through all this, paradoxically, Chavez is falling deeper into debt. That must be galling for the former oil billionaire. A few days ago, Brazil's federal development bank agreed to lend Venezuela US$4.3 billion for infrastructure projects. Fudging a bit when he announced this, Chavez said he was creating a "joint, multi-billion dollar fund with Brazil." But if there's any doubt that it was simply a loan, it comes on top of several earlier loans, including US$8 billion from China and US$3.5 billion from Japan. Oh, how far the mighty can fall.
Joel Brinkley is a former Pulitzer Prize-winning foreign correspondent for The New York Times and now a professor of journalism at Stanford University.