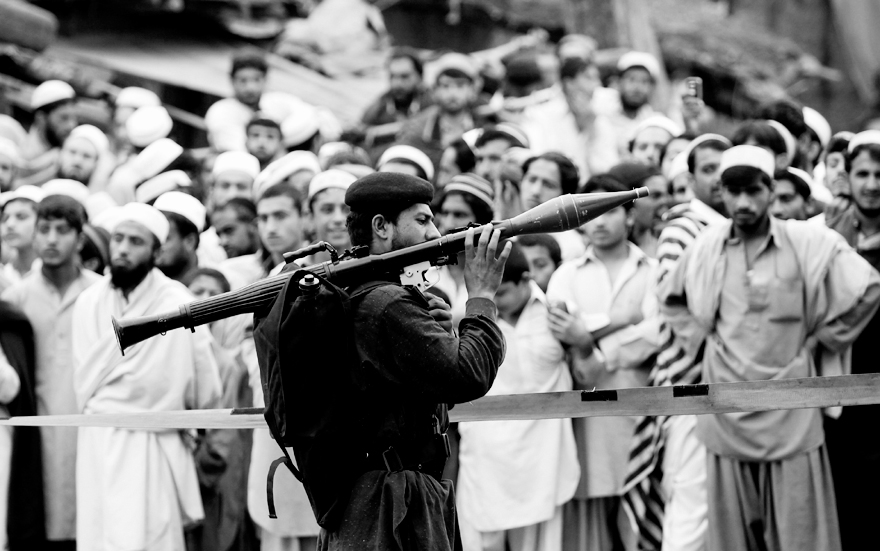 A suicide bomber rammed a car into troops in northwest Pakistan killing five people as panicked residents fled a key town under gunfire yesterday, fearing that a peace deal would collapse.
The deadly attack came on the eve of President Asif Ali Zardari's first face-to-face talks with U.S. counterpart Barack Obama, with Washington concerned that emboldened militants are threatening Pakistan's very existence.
The bomber ploughed a car packed with explosives into the back of a paramilitary jeep at a checkpoint near Bara, where the northwest city of Peshawar runs into the Taliban and al-Qaeda-infested tribal area of Khyber.
Rescue workers picked charred bodies out of the wreckage, as police and hospital officials said four civilians and a paramilitary soldier were killed.
Police said 21 people were also wounded, including several children who were waiting for a van to take them to school.
"As the vehicle stopped at a police checkpoint the bomber hit his explosive-laden car from behind," police officer Abdul Ghafoor said.
There was no claim for the attack but Pakistan's paramilitary are locked in a fierce offensive in the northwest against Taliban bitterly opposed to the government's cooperation with the United States in the "war on terror."
Zardari is in the United States preparing for talks with Obama tomorrow, hoping to secure a massive U.S. aid package to better equip the military and boost development in his cash-strapped nuclear-armed country.
His weak civilian government is under U.S. pressure to crush militants in the northwest, where Washington says al-Qaeda, Taliban and other Islamists pose the biggest terror threat to the West and an "existential threat" to Pakistan.
The White House talks, which also involve Afghan President Hamid Karzai, are part of a sweeping new U.S. strategy designed to defeat militants threatening the governments in Afghanistan and Pakistan.
Zardari's administration came under fierce criticism at home and abroad for ratifying a February agreement with an Islamist cleric to put three million people in the northwest under sharia law in a bid to end a Taliban uprising.
Frightened residents fled suburban areas in the main town of Swat, where the Taliban concentrated a two-year insurgency, after the army issued an evacuation order that ignited fears of an imminent new offensive, witnesses said.
The military ordered four neighborhoods on the edge of Mingora to evacuate and announced a break in an indefinite curfew for the displaced to flee to a special camp as bullets rattled through parts of Mingora.
Local residents said "large numbers" were leaving in panic, weighed down with whatever belongings they could carry on foot, waiting at bus stations or driving away in private cars, although the military withdrew the order.
"We have now suspended this order and people are directed not to vacate their homes because the government has no immediate plan to launch an operation in these areas," said local military spokesman Major Nasir Khan.
A government official said five people died overnight in crossfire between militants and security forces in Swat, where a once-thriving tourist industry has been decimated by the brutal Taliban insurgency seeking to impose sharia law.
The violence broke out with the government and Islamist hardliners at loggerheads over an Islamic appeals court - which the Taliban demanded under the peace agreement but rejected for being created without proper consultation.
The military has also been fighting hundreds of armed Taliban who thrust further south and east out of Swat into the districts of Lower Dir and Buner.
Late Monday, top U.S. senators unveiled plans to expand and overhaul civilian U.S. aid to Pakistan, calling it an urgent step to help defeat Islamists who threaten the nuclear-armed ally's stability.
But the U.S. national security adviser, General James Jones, told the BBC that Washington needed further guarantees about the security of Pakistan's nuclear arsenal, despite reassurances that the weapons are out of Taliban reach.