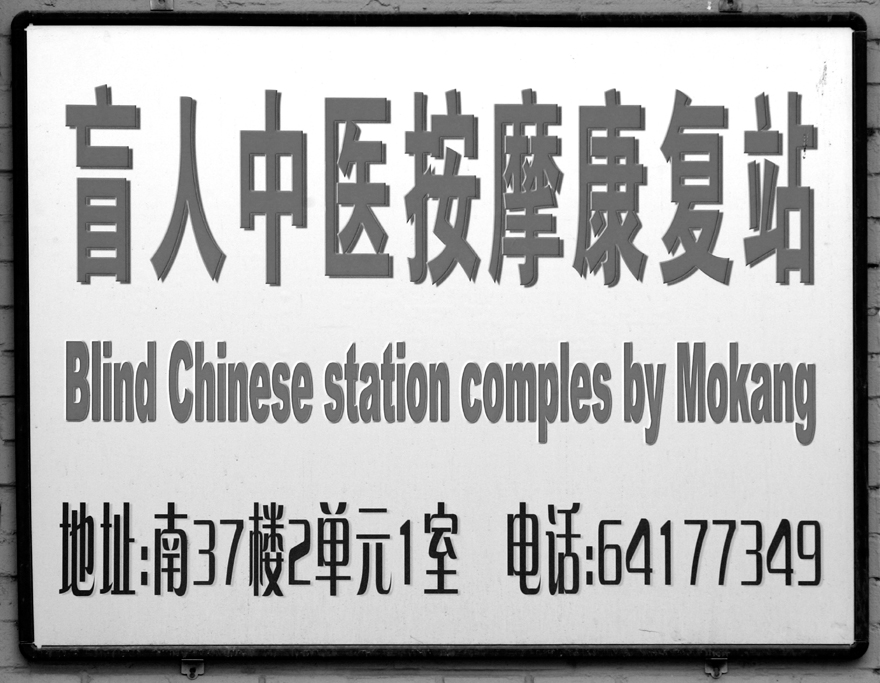 Oliver Radtke says he first discovered the odd and wonderful world of Chinglish in 2000 in a Shanghai cab, where he saw a curious sign reading: "Don't forget to carry your thing."
Nine years later, the German multimedia producer has written two popular books on the subject, and is working hard to preserve China's special brand of English for generations to come.
"There is a lot in Chinglish that is so much more than just incompetent English or incorrect English," said the 32-year-old Radtke, who focuses on written examples of the lingo on signboards, menu cards and shop fronts.
"A lot of the Chinglish signs carry a certain Chinese notion in them which enriches the English language and makes English more Chinese in the sense that there is a certain Chinese flavor, a certain Chinese way of thinking."
The view held by many - not least by the Chinese authorities - is that Chinglish is an embarrassment that must be wiped out at all costs, but Radtke disagrees, saying the "language" should be preserved. "This is one of my favorites," the Beijing resident said, pointing to a photo in one of his books of a public lavatory sign which explains: "You can enjoy the fresh air after finishing a civilized urinating."
"In the West, you would never use the word 'urinating' in a public toilet, but the Chinese don't have this convention, and it's a very direct approach," he said.
"It challenges you as a Westerner to think about why we carefully circumvent certain uses of words. Why are there those conventions? Why is it almost about stigmatizing certain sets of words in public use?"
Some signs highlighted in Radtke's two books are decidedly politically incorrect - "Cripple's lane" rather than "Wheelchair path," or "Deformed man toilet" instead of "Handicapped restroom."
Others seem almost poetic, attaching emotions to inanimate objects such as grass or fire.
"Our life will be ceased if you step hard," a sign at a lawn in the southwest city of Kunming says, while visitors to one section of the Great Wall are reminded to be careful: "Do not forget the fire is heartless."
Some signs make rather grandiose promises. "Best love since 1996," reads an advertisement for a wedding photo studio.
Radtke's fascination first led him to launch a blog in 2005, followed two years later by a book, "Chinglish: Found in Translation," which has now sold 50,000 copies. A follow-up title has just been published.
"The initial reaction of many Chinese users was very much against the project. They thought I was making fun of them," he said.
"It's still a very interesting topic - how difficult it is as a foreigner in China to write in a critical way about certain social phenomena."
But Radtke says the Chinese are increasingly supportive of his efforts, as they have come to understand that he believes Chinglish is in fact enriching the English language.
The entire notion of one single, standard version of English is outdated, he says, because it now has far more than one billion regular users worldwide, and a rapidly growing number speak it as their second language.
"From their usage the language will be influenced one way or the other, whether native speakers like it or not," he said.
In recent years, China has kicked off campaigns to root out poor grammar and misused vocabulary in official usage.
The most famous of these drives took place in Beijing prior to the Olympic Games in August last year. During that time, authorities rechristened the Dongda Proctology Hospital, formerly the Dongda Anus Hospital.
These campaigns will never fully succeed, Radtke says, adding he remains optimistic that Chinglish will never disappear from the mainstream.
"I'm pessimistic when it comes to official signs in the big cities. But restaurants, companies, private institutions, small shop owners will all produce a lot of Chinglish."