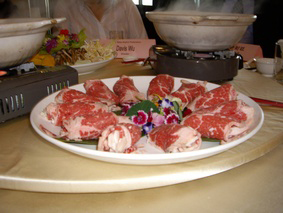 If the mere mention of swine flu has you skittish about eating pork, this would be a great time to get back into the habit of buying U.S. beef.
A delegation from the U.S. Meat Exporting Federation was in Taiwan last week to promote sales of U.S. beef products, appearing at a luncheon on the 12th floor of the Riverview Hotel in Taipei, where the chefs prepared a varied and interesting medley of Chinese, Oriental and Western dishes featuring beef but also including many ingredients familiar to local consumers.
One example was the banquet staple "Buddha jumped over the wall," which is usually prepared with pork but was done this time using several cuts of beef and a bit of seafood, plus pretty much the same vegetables and spices normally used in the dish. The beef cuts resulted in a mix that was far less oily than usual, while delivering a full amount of flavor and texture.
Another twist on traditional dishes was the use of a number of flower petals and colorful spices which brightened the serving dish and also added a novel and delightful piquancy to the entree.
From the opening beef rolls (pictured) which were dipped in a hot pot, to the boneless short ribs with rosemary which came later in the meal, and in dishes along the way, the chefs offered platters festooned with turnip and carrot cranes standing in beds of vibrant flower petals which all went into the mix with the beef. Of particular note was the use of cattails, which delivered a dash of sweetness and citric sourness along with its cheery bright color, balanced by the poignant taste of garlic.