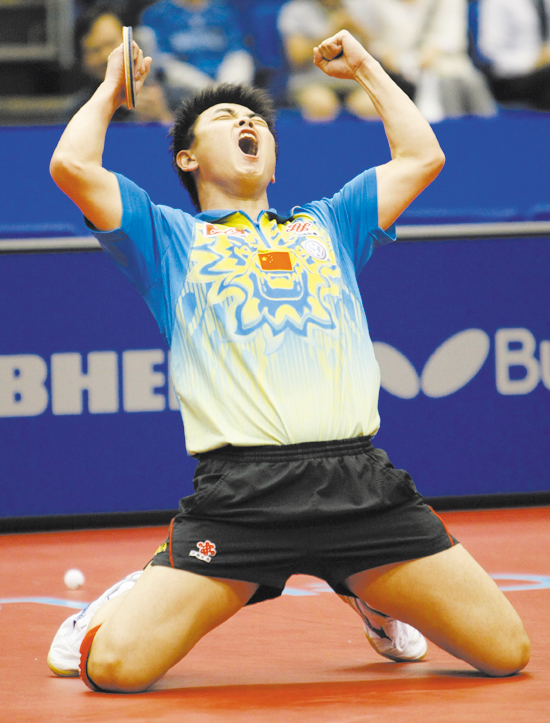 Wang Hao lived up to his world number one status by beating three-time champion Wang Liqin to win the men's singles title at the World Table Tennis Championships yesterday.
Wang Hao, who won the men's doubles title with Chen Qi on Monday, made it a double victory with a 11-9, 13-11, 11-5, 11-9 win over the world number five. Wang Hao improved his record against Wang Liqin to 10 wins against 11 defeats.
It was China's third straight men's singles title and 15th overall.
Women's title
Reigning world number one Zhang Yining won the women's singles event yesterday, beating defending champion Guo Yue to regain the title she won in 2005.
The Beijing Olympic gold medalist, who was the favorite here, stormed back from two games down for a 10-12, 3-11, 11-2, 11-7, 11-7, 11-9 victory over the world number two in the all-Chinese final.
"When I won the Athens Olympic singles and doubles gold medals, I was more excited. I'm not so excited this time, but still I'm happy about it," said Zhang, 27.
"This is the first big tournament since the ITTF changed the rules and I didn't know how far I could reach with the speed of the ball reduced. I just tried to play my usual game and it was a big success to win the title.
"Guo Yue is young and she has good skills as well. She is a tough opponent to play against. When I was 3-6 down in the last game, I just tried to do my 100 percent until the end."
Meanwhile, Guo said: "I did my best. But sometimes I rushed too much. I tried to attack too quickly. She started to attack me in the third game and I was a bit late to cope with her attacks."
Zhang, who lost to Guo in the 2007 championships, stretched her head-to-head record against Guo to 10 wins and four defeats.
It was China's 18th women's singles title at the championships.
China had already assured itself of a clean sweep of all five titles in Yokohama, with all-Chinese finals in every event.