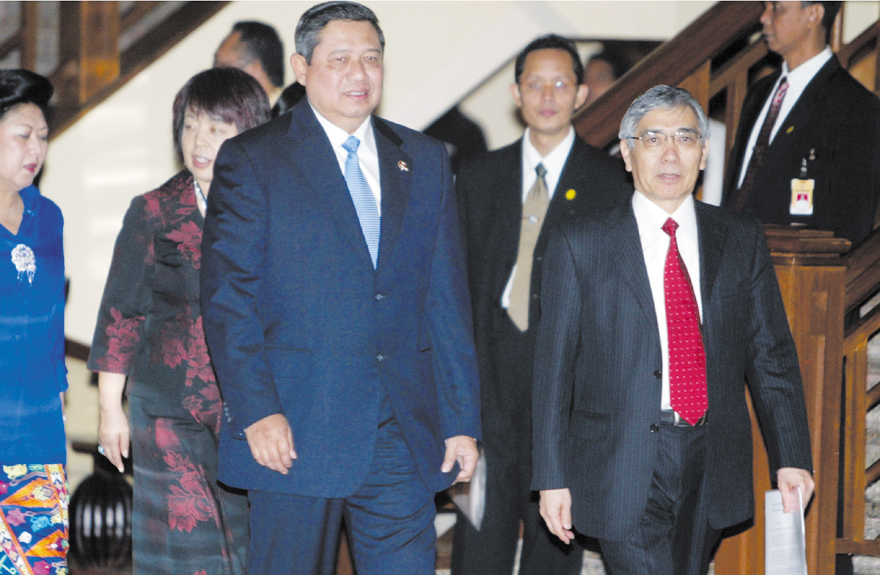 The Asian Development Bank (ADB) called yesterday for a fundamental "rebalancing" of regional economies in response to the global crisis, while predicting a "mild recovery" next year.
Bank President Haruhiko Kuroda said the region would record only 3.4 percent growth this year but could expect a rebound to around 6.0 percent growth in 2010, as he opened the ADB's board of governors annual meeting in Bali.
"With strong national and regional efforts and a mild recovery expected in the global economy next year, developing Asia and the Pacific should bounce back to about 6.0 percent growth in 2010," he said. "These are positive signs, therefore this should not be a time of despair."
He outlined a huge expansion in the ADB's lending plans to help stimulate developing economies across Asia, after shareholders agreed last week to triple the bank's capital base in response to the global downturn.
The bank will increase its overall lending assistance to the region's poorest countries by more than US$10 billion in 2009 and 2010, including three billion to meet "urgent needs stemming from the crisis," Kuroda said.
Some of that new lending would aim to help Asian economies adjust to plunging demand for their exports to markets such as Europe and the United States.
"The transfer of savings from one part of the world to another worked well when advanced economies could absorb production from developing economies, but the current state of the global economy suggests that era has passed," Kuroda said.
"By rebalancing export-driven growth with a greater reliance on domestic demand and consumption, Asia can lead the way in charting a new, globally beneficial development course."
Interest rate cuts and government spending will help spur the recovery in Asia, whose banks are not suffering problems on the same scale as their US and European peers, according to the International Monetary Fund.
Recent economic data have raised hopes that China could be the first major economy to disentangle itself from the worldwide crisis, providing new growth momentum for its trading partners across the region.
In India, expectations of a healthy harvest fuelling consumer spending has driven India's benchmark Sensex share index to a six-month high as fund managers switch their country ratings to "overweight" from "underweight."
Japan's factory output rose 1.6 percent in March from the previous month, the first increase since September, triggering a buying spree on the Japanese sharemarket last week.
Kuroda also called for changes to the global financial architecture to give voice to the aspirations of Asia, where powerhouses like China and India are emerging as rivals to U.S. domination of the world economy.
Ten Asian countries plus China, Japan and South Korea agreed Sunday to set up a US$120-billion regional emergency fund to help Asian economies out of crises, a move Kuroda applauded.
"It is ... important to create a financial architecture that gives developing countries a voice more commensurate with their share of world output and trade," he said.
His comments echoed China's calls for a greater say in international economic decision-making at institutions such as the IMF.
Indonesian President Susilo Bambang Yudhoyono said "precautionary mechanisms" like the regional liquidity fund were necessary to "ensure foreign exchange stability and confidence" in crisis-hit local currencies.
He said Indonesia, Southeast Asia's biggest economy, had learnt from the economic turmoil that swept Asia in the late 1990s and had launched "sweeping reforms" that helped it avoid recession in the current downturn.
The Indonesian economy is forecast to track the regional rebound, with growth of around four percent this year recovering to six percent in 2010.