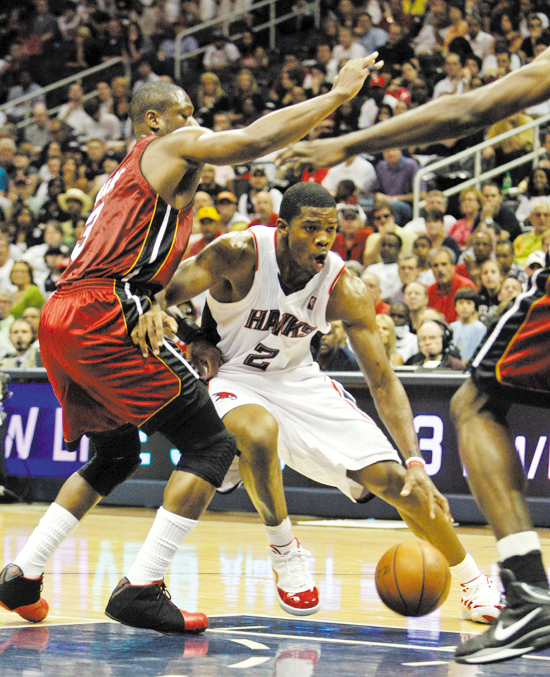 Joe Johnson scored 27 points to make up for a mostly disappointing series as the Hawks won the first Game 7 ever played in Atlanta, beating Dwayne Wade and the Miami Heat 91-78 Sunday to advance to the second round of the NBA playoffs for the first time in a decade.
A series totally devoid of drama ended in appropriate fashion. After a back-and-forth first quarter that ended with Atlanta ahead only 20-18, the Hawks pulled out to a 49-36 lead by halftime and led by as many as 29 points in the fourth period. Every game in the series was decided by at least 10 points, and this one wasn't nearly as close as the final score.
Nuggets 109, Mavericks 95: At Denver, Nene scored 18 of his career playoff high 24 points in the first half as Denver raced past Dallas. Carmelo Anthony scored 23 points, including a dunk off J.R. Smith's behind-the-back assist that rocked the arena in the closing minutes. Smith added 15 points, leading a bench that outscored Dallas' celebrated reserves 38-24 before both teams emptied their benches in the meaningless final minutes. Dirk Nowitzki led Dallas with 28 points and 10 boards and Josh Howard, Jason Kidd and Jason Terry each scored 15.