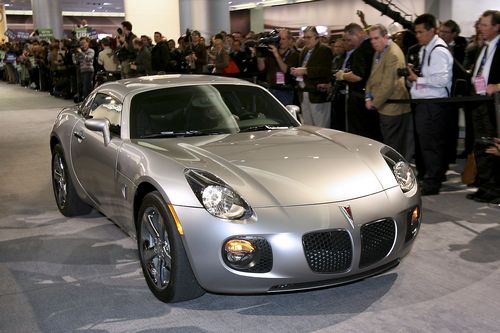 The storied Pontiac brand is dead and more car factories and jobs are about to disappear - the latest casualties of a massive restructuring plan that GM is counting on to help it stave off bankruptcy protection.
The struggling automaker was tk announce details of its plan later yesterday as it makes an offer to its bondholders to swap debt for company stock. GM owes US$28 billion to large and small bondholders, and under Securities and Exchange Commission rules, it must disclose its operational plans when it makes an exchange offer.
Two people briefed on GM's plan confirmed that it includes the demise of Trans Am sports car brand Pontiac, 83 years after the first Pontiac car was introduced. Within three years, half a million Pontiacs were sold, and the brand quickly grew in popularity, from early models like the Chief and the Master Six Coupe, to the Bonneville convertible, to the GTO - one of America's first muscle cars and so popular it inspired Ronny and the Daytonas to immortalize it in song.
But efforts in the last few years to market Pontiac as performance-oriented brand failed. The company had said it wanted to keep Pontiac as a niche brand with one or two models, but is buckling under tremendous government pressure to consolidate its eight brands, several of which lose money.
The company also has decided to close more factories than the five it announced in February, the two people said, asking not to be identified because the plan has not yet been made public. One of the people said GM will list specific numbers of blue-collar job cuts, and announce another round of U.S. salaried job cuts beyond the 3,400 completed last week.
Chief Executive Fritz Henderson has said the company will go further and faster in making its cost cuts to reduce the number of cars and trucks it needs to sell to break even. One of the people briefed on the plan said GM will accelerate many cuts previously planned for 2014 to instead take place between now and 2010, although specifics were not available.
The people said GM won't have much new information on Hummer, Saturn or other brands, including Europe's Opel. GM has indicated it wants to focus on four core brands, Chevrolet, Cadillac, GMC and Buick.
GM is living on US$15.4 billion in government loans and faces a government-imposed June 1 deadline to restructure or go into bankruptcy protection.
The government's restructuring demands include swapping at least two thirds of GM's unsecured bond debt for equity in the company. Such a move would help GM straighten out its debt-laden balance sheet.
Chrysler deal
Chrysler LLC, which is living on US$4 billion in government loans and is expected to get US$500 million more, faces a Thursday deadline to restructure and ink an alliance deal with Italian automaker Fiat SpA. The government also wants Chrysler to exchange much of its US$6.9 billion in debt for equity in the company, but with the deadline fast approaching, Chrysler and its secured debtholders remain far apart.
Both GM and Chrysler also must win concessions from the United Auto Workers union.
The UAW said late Sunday it reached agreement on concessions with Chrysler, Fiat and the U.S. government. Fiat CEO Sergio Marchionne was in the U.S. as talks continued for the automaker to take a 20 percent stake in Chrysler in exchange for its small-car technology.