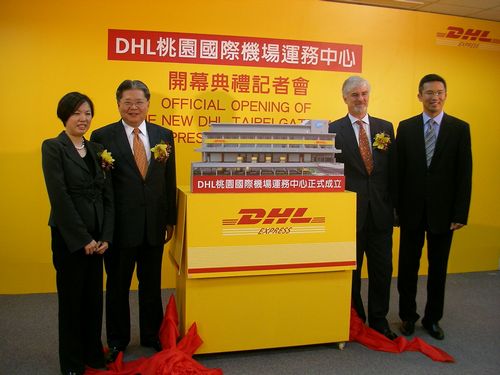 DHL, a leading express and logistics company inaugurated its new Taipei Gateway yesterday at Farglory Free Trade Zone in the Taoyuan International Airport. The construction is worth NT$210 million and will raise shipment handling capacity three times, from 3,600 to 11,000 pieces per hour.
"Taiwan is a part of the global network," said Stephen Fenwick, Senior Vice President, DHL Express Asia Pacific during the opening ceremony.
"With the best available location in the market, the growth potential in Taiwan is tremendous," he said. "I look forward to building an extended relationship with Taiwan."
DHL Taipei Gateway features a 24-hour Drop-Off center where customers can send their shipments whenever they want. In addition, 100 closed circuit televisions (CCTVs) have been installed in the expanded Taipei Gateway to provide all time monitoring and further enhance shipment security.
"With our investment in the DHL Taipei Gateway, we are committed to providing world-class logistics services to local companies, helping them internationalize with our extensive network worldwide," said Jerry Hsu, President of Greater China Area, DHL Express Asia Pacific. "The plan we have for Taiwan is long-term."
Taoyuan County Commissioner Eric Chu expressed his welcome during the inauguration.
"We have been working on building Taoyuan as an Aviation City for years," said Chu while he thanked Hsu, "DHL's investment is a wise and insightful decision."
An aviation city, also known as an aerotropolis, is a type of mini-city comprising aviation-intensive businesses extending up to 25 km outward from major airports. The aviation city project initiated by the current Ma Ying-jeou administration is hoping to attract NT$1 trillion of foreign investment.