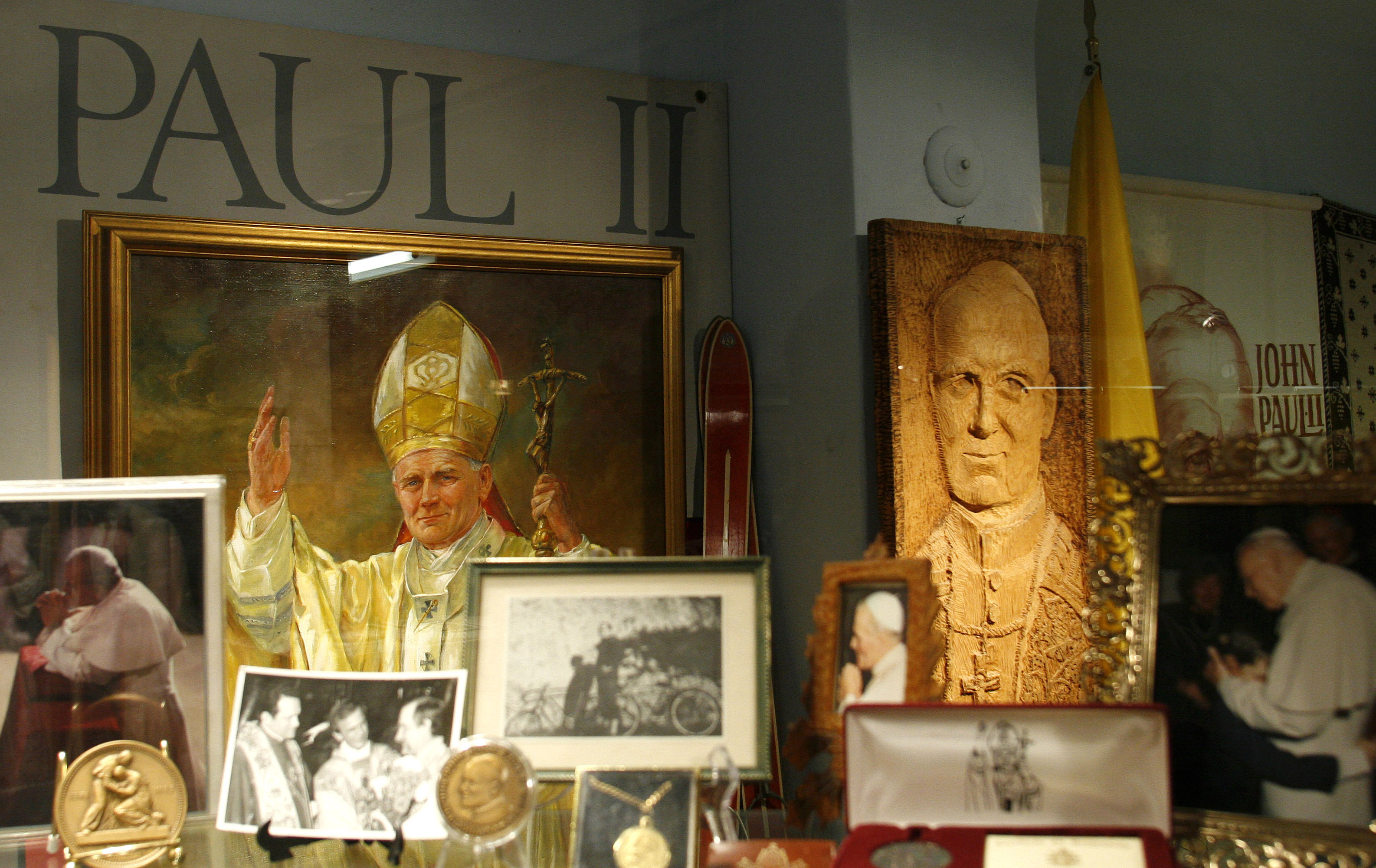 A picture of John Paul II was banned recently in England.
We're not talking holy card here. His image was plastered onto a flier for a place called Club Fire. Beneath the logo "Berserk," John Paul is shown in traditional papal whites, holding a beer bottle and dancing oh-so-close with a hot young thing who's not wearing a whole lot of dress. Yes, the image is a Photoshop-type fake.
I admire John Paul and understand how the ad would upset people, but I wasn't overly troubled by it. I'm far more concerned about denying the right of free expression under the pretext of concern for religion.
But let's start with the ad.
First, for good or ill, to be a public figure is to have your image used and abused, from the overweight, slacker George Washington in Boost Mobile TV ads to the reverential treatment of President Obama on the famous "Hope" poster.
Second, I can't believe John Paul would get worked up over this. The saint-to-be risked his life by secretly studying for the priesthood in Nazi-occupied Poland and by standing up to Communist dictators as both bishop and pope. "Be not afraid," he often said, and titled one of his books. A bar flier is going to hurt this guy?
Most important, I worry when something is banned because it's "offensive." There is much to be offended about, and legions of thin-skinned people who are happy to impose their views on the allegedly unenlightened and insensitive. Not to publish because someone somewhere might be offended is wrong.
As Canadian publisher Ezra Levant told his "human rights commission" tormenters while under investigation last year for offending Muslims, free speech is a God-given right to be protected "even if the intent is to offend."
People upset by the pope ad have every right to legally and nonviolently make their feelings known. They could talk to the bar owners, picket the place, or even boycott it. But in this case, according to press reports, "angry Poles and Catholics" complained to the Ipswich and Suffolk Council for Racial Equality.
ISCRE took the issue to the Advertising Standards Authority, which said the ad caused "serious offense" and banned it. ISCRE and the authority are not government entities, but the ban ensures that no media outlet will touch this ad.
ISCRE had hoped for more, with its director calling the ad "discrimination based on religious grounds." The group didn't win that battle, but if certain members of the United Nations have their way, a ruling of discrimination might be possible in future cases.
Last month, the U.N.'s Human Rights Council passed a nonbinding "defamation of religion" resolution that encourages member states to adopt laws protecting religion from criticism. It was proposed by Pakistan, on behalf of the 56-nation Organization of the Islamic Conference. So guess what religion is the only one mentioned by name in the resolution?
Granted, the council is somewhat of an international joke. It searches the world over for abuses of human rights but never finds any in member states China, Saudi Arabia, or Cuba. Slaughter in Sudan, Myanmar, and North Korea earn a finger wag, while the council focuses on what it considers the No. 1 abuser of human rights, Israel.
So it's not as if all nations will take this resolution - or anything the council does - seriously and adopt it tomorrow. In fact, in the hopes of attracting more Western countries, "defamation of religion" language has been dropped from the official document of the U.N. race conference (think Human Rights Council on steroids), which began last Monday.
The real and immediate danger is that the council's action blesses the persecution of nonbelievers and dissenters. Countries such as Iran, Saudi Arabia, Pakistan, Egypt, and India already jail and abuse bloggers, clerics, activists, and others who "offend" Islam. Even Britain refused entry to a Dutch legislator recently because his film on the Koran, "Fitna, is considered anti-Muslim.
The absurdity is summed up in a release by Paula Schriefer of Freedom House, a rights-advocacy group: "It's preposterous to suggest that criticizing or satirizing a religion automatically leads to hatred or violence or in any way prevents its adherents from practicing their faith. In fact, the ability to question religious beliefs or tenets is not only a right of free expression, but a critical aspect to freedom of religion itself."
There's a huge gap between being offended and being discriminated against. People, whether on U.N. panels or local committees on racial equality, must recognize this and speak out against the erosion of civil liberties under the guise of protecting religion.
As the man said, be not afraid.
Kevin Ferris is assistant editor of the Editorial Page of the Philadelphia Inquirer.