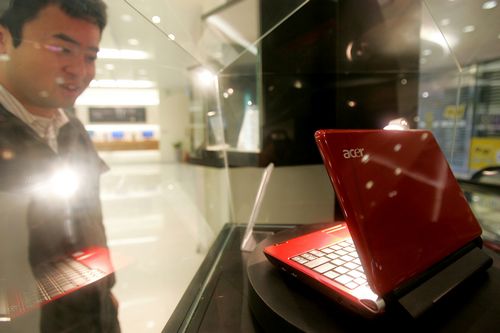 “We expect the user base for notebooks to increase and for this to offset the negative impact of the price declines and create value for the notebook market as a whole,” Taipei-based analyst Calvin Huang wrote in a report Tuesday. “We think the market is underestimating the price elasticity of notebooks, and that the low-price trend could stimulate more demand than the market expects.”

Acer Inc., the world’s second-largest notebook computer supplier, was raised to “buy” from “hold,” while Quanta Computer Inc., the world’s largest manufacturer of notebooks computers, had its investment recommendation lifted to “hold” from “sell,” Huang wrote.

Acer shipments climbed 25 percent in the fourth quarter of last year, the most among the top five brands, because of its release of cheaper computers, according to IDC. Low-cost netbook shipments will almost double this year to 21 million units amid a 12 percent decline in the overall PC market, according to Gartner Inc.

Asustek Computer Inc., supplier of the Eee PC low-cost netbook, had its recommendation increased to “outperform” from “hold.”