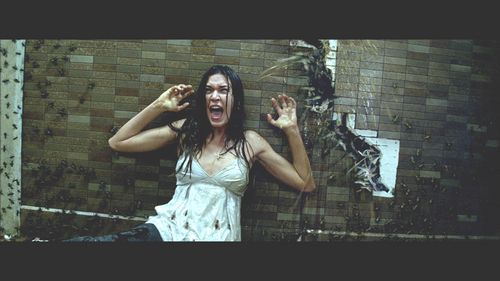 'the Unborn' 生靈勿進
Directed by: David S. Goyer
Starring: Odette Yustman, Gary Oldman, Jane Alexander
Reviewed by: Christy Lemire, Associated Press
Opens Taiwan: Today
The Kabbalah. Hot college students. An abandoned mental institution. Gary Oldman. Jogging. Twins. Nazi scientists. A suicidal mother. A lost blue mitten. What do these things have in common? They're all pieces in the convoluted mythology of "The Unborn."
Best as one can tell, writer-director David S. Goyer's film is a sort of Jewish version of "The Exorcist," which is a vaguely novel concept. Catholics are usually the ones who have all the fun purging demons. But Goyer, who wrote the "Blade" series and co-wrote "The Dark Knight," makes things laughably more complicated than they needed to be.
Well, there are some effective scares here, and you'll laugh at yourself afterward just for jumping and squealing like a little girl. But other images and pieces of dialogue are just as hilarious - and that probably wasn't their intention. (Jane Alexander, as a Holocaust survivor with a secret, delivers a line about Auschwitz that's particularly off in tone.)
Odette Yustman runs around in tight jeans, tank tops and boy shorts as Casey Beldon, a young woman being haunted by startling dreams, then a weird neighborhood boy, then hallucinatory images of insects, and finally a full-blown spiritual attack. It's almost Bunuel-esque the way the images come at you in surreal, random fashion, especially when Casey finds an old black-and-white film reel and projects it on the wall in her base-ment, something that unsettles her further.
Only Oldman, who classes things up in his few scenes as Rabbi Sendak, can help Casey fend off the impending possession. Meagan Good isn't quite as helpful to Casey as the obligatory wisecracking best friend, but she does get a couple of amusing zingers. This is especially true in the scene when the two visit a mysterious woman in an old-age home (Alexander), who may have clues about both Casey's mom's suicide, the twin brother she never knew she had and images of intense little boys that keep popping up everywhere.
One kid repeatedly utters the menacing line, "Jumby wants to be born now," which perhaps won't grab hold of the cultural zeitgeist like "Redrum," for example, a but it's still good for a jolt. And maybe a laugh or two.