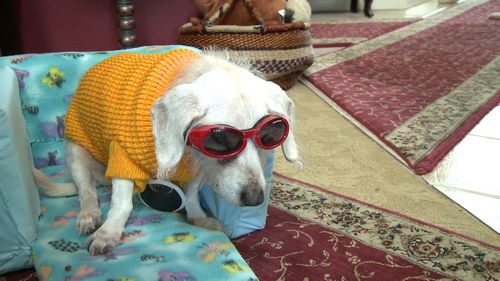 She can't hear well, she doesn't like the cold and she no longer goes on four-mile runs. But Chanel, a 20-year-old dachshund in Port Jefferson Station, N.Y., is enjoying the perks of being the world's oldest dog.
The next edition of the Guinness Book of World Records, due out in September, will make that title official. She's been featured in British newspapers. A producer for Jay Leno wants to fly her to California.
She's taking it all in stride as she ambles toward her 21st birthday on May 8, snuffling down chicken and pasta, then curling up to nap.
"She's always had this incredibly sweet disposition," said her owner, Denice Shaughnessy, 51, a secretary at Rocky Point Middle School. "And she's been through everything with me."
Back in 1989, when Shaughnessy was a single mother in the Army struggling to pay the bills, she found two dachshund puppies at a shelter in Virginia. She wanted both for her daughter but could only afford the $25 fee for one.
Months later, Shaughnessy's house burned down, but her daughter, LaToya, and Chanel got out safely.
"I've always treated the dog well, even when we were on a tight budget," Shaughnessy said.
At one point, Shaughnessy couldn't afford her auto insurance and had to give up her car. Mother and daughter lived on macaroni and cheese, and the dog shared the meals.
An Army brat for 140 dog years
Chanel went with Shaughnessy as her Army career took her to Germany, and West Point. They moved to California, where Shaughnessy cared for gravely ill grandparents.
Along the way, Shaughnessy got married, then settled on Long Island with her husband, Karl. Chanel outlived three other dachshunds.
Denice and Karl Shaughnessy admit to pampering Chanel at times - massaging her after long runs, for example. They let her choose between dog food and the human kind.
(And kids, please note that Chanel avoided smoking and drinking alcohol.)
Whatever the family is doing works well, said Philip Zangra, their veterinarian in Port Jefferson Station. "Her condition is miraculous," he said.
In dog years, as they say, Chanel is 140 years old. Put it this way: If she were a human, she would have been born in 1869 - four years after Abraham Lincoln's death.
Ann Hohenhaus, a veterinarian at the Animal Medical Center in Manhattan, said a 20-year-old pooch is "definitely unusual." But she said a study debunked the myth of seven dog years for every human year because smaller species of dogs live much longer on average than larger ones. As it happened, Guinness record-keepers were looking for a replacement for Butch, a beagle in Virginia that died in 2003 at age 20.
Guinness demanded a birth certificate, dated photos and notes from veterinarians.
"It's a real achievement for them to actually have got the record," as Guinness gets all kinds of claims that can't be proved, said Amarilis Espinoza, Guinness public relations manager in London.
At the Shaughnessy house, there's an agreement: Chanel won't be kept alive by extraordinary means. When her time comes, Denice Shaughnessy said, "I want her to go in her sleep."