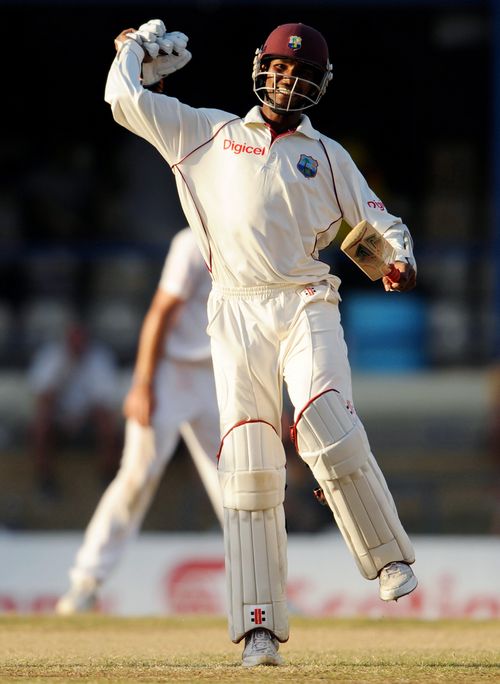 England failed in their bid for a series-leveling victory, when West Indies held on stoutly for a hard-fought draw in the fifth and final Test here on Tuesday.
England's bowlers put in a big effort, after the visitors set West Indies 240 for victory from a minimum of 66 overs.
But the home team resisted strongly to finish on 114 for eight when time ran out.
Graeme Swann was the pick of the England bowlers with three wickets for 13 runs from 21 overs, Jimmy Anderson snared three for 24 from 16 overs, and Monty Panesar bagged two for 34 from 19.5 overs.
The result meant England lost the five-Test series 0-1, following an innings and 23-run defeat in the opening Test at Sabina Park in Jamaica, where they bowled England out for their third-lowest total in Tests of 51.
This was followed by the aborted second Test at the Vivian Richards Cricket Ground in Antigua, and drawn Tests at the Antigua Recreation Ground and Kensington Oval.
The result also means that the visitors surrender the Wisden Trophy, symbol of Test supremacy between the two sides.
England made breakthroughs at regular intervals throughout the evening period to get a strong sniff of victory, but the West Indies ninth wicket pair of Denesh Ramdin and Fidel Edwards survived 19 balls to deny them.
England made a giant leap forward, when Swann trapped Shivanrine Chanderpaul lbw for six in the fourth over after West Indies continued from their tea-time total of 78 for three.
Three overs later, Anderson claimed Brendan Nash lbw for one to intensify the pressure on West Indies and leave them on 85 for one.
But time and overs, and not runs, were important, and England continued to work their way through the West Indies batting, when Panesar was fortunate to have Ryan Hinds caught at second slip for the top score of 20.
TV replays showed Hinds never got a touch on a delivery that spun back and hit his front pad, and ballooned to Paul Collingwood, and he could not appeal the decision since West Indies had already used up their two referrals.
England knew that a lame Chris Gayle, still moving gingerly from his hamstring strain when he reached his hundred two days earlier, was the last vestige of hope for West Indies, and when Panesar had him lbw for four, the visitors moved in to finish things off.
Six overs later, Anderson bowled Daren Powell for a duck, and this brought Edwards to the crease, and he again defied England and prevented them from winning a Test as he and Powell had done in the third match at the ARG.