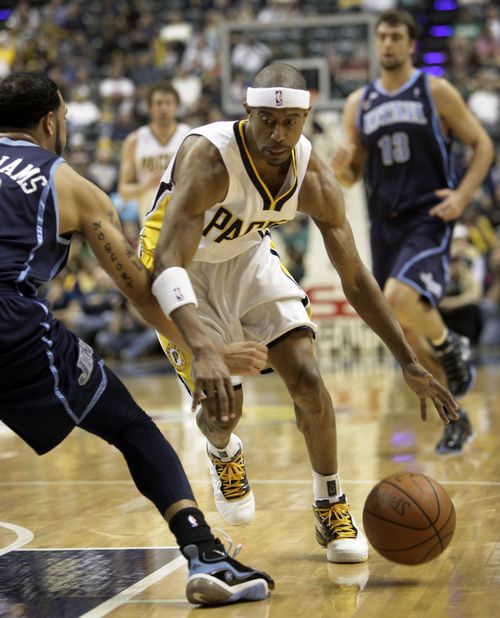 Mehmet Okur scored 24 points as the Utah Jazz beat the Indiana Pacers 112-100 on Tuesday for their 12th straight victory.
Paul Millsap finished with 22 points and nine rebounds, Ronnie Brewer scored 18 points and Deron Williams had 12 assists for the Jazz, who moved closer to the franchise record of 15 consecutive victories.
Troy Murphy scored 23 points and tied a Pacers home record with seven 3-pointers. He also grabbed 13 rebounds, while Jarrett Jack and T.J Ford each added 21 points for Indiana.
Mavericks 122, Suns 117: At Phoenix, Dirk Nowitzki scored 23 of his 34 points in the second half as Dallas beat Phoenix to widen its lead over the Suns for the final playoff spot in the Western Conference.
The Suns lost their season-worst fifth in a row to fall five games behind the Mavericks, with 18 to play, for the eighth playoff berth in the West.
Jason Terry added 25 points and Jose Barea 16 for Dallas. Shaquille O'Neal scored 21 on 9-of-10 shooting for Phoenix to pass Elvin Hayes for sixth on the NBA's career scoring list. Steve Nash had 23 points and 13 assists for the Suns. Matt Barnes added 21 points.
Cavaliers 87, Clippers 83: At Los Angeles, LeBron James recorded his second straight triple-double with 32 points, 13 rebounds and 11 assists, and Mo Williams hit a go-ahead 3-pointer with 6.6 seconds to play as Cleveland rallied from a 19-point, fourth-quarter deficit to beat the Los Angeles Clippers.
James, last season's NBA scoring champ, recorded his 22nd career triple-double, scoring his final 10 points in the frenetic fourth quarter and recording his 800th career steal. The Cavaliers' 11th victory in 13 games increased their lead over Boston in the Eastern Conference.
Al Thornton and Zach Randolph each had 20 points for the Clippers.
Spurs 100, Bobcats 86=: At San Antonio, Tim Duncan had 18 points and 11 rebounds as San Antonio stopped Charlotte's franchise-record winning streak at six.
Tony Parker and Roger Mason added 21 points apiece for the Spurs, who couldn't shake the Bobcats until late before ending Charlotte's recent surge that pushed the Bobcats into the playoff picture.
Raja Bell and Emeka Okafor each had 16 points for the Bobcats, who are a game behind eighth-place Chicago in their bid to make the playoffs for the first time since joining the NBA in the 2004-05 season.
Knicks 120, Bucks 112: At Milwaukee, Nate Robinson scored 10 of his 32 points in the final five minutes to help New York beat Milwaukee for a rare road victory.
Larry Hughes added a season-high 39 for the Knicks, who have won only eight road games all season. With Tuesday's victory, New York also managed to prevent Milwaukee from its first sweep of the season series since 1990-91.
Charlie Villanueva scored 32 for the Bucks, who came into Tuesday's game trying to cling to the final playoff spot in the Eastern Conference despite a season filled with significant injuries.
Thunder 99, Kings 98: At Sacramento, California, Jeff Green and Russell Westbrook each scored 24 points as Oklahoma City held on to beat Sacramento for its fifth victory in six games.
Thabo Sefolosha had 17 points for the Thunder. Malik Rose scored 11 points and Nenad Krstic added nine points and 15 rebounds.
Spencer Hawes had 20 points, 10 rebounds and five assists for the Kings. Francisco Garcia made four 3-pointers and scored 18, Andres Nocioni had 16 points and seven rebounds, and Rashad McCants added 13 points. Kevin Martin, the Kings' leading scorer, was on the bench in the game's final 15 minutes and scored 12 points.