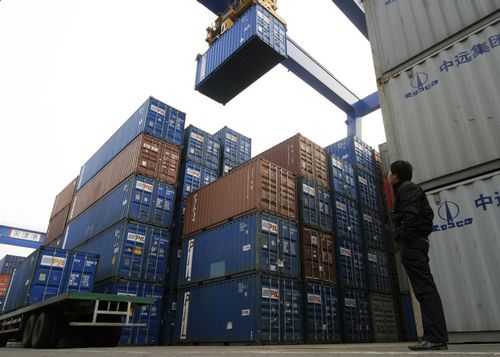 The decline in China's exports accelerated in February, but Asia's bleak picture was tempered by other news yesterday of a jump in Chinese auto sales and a smaller-than-expected drop in Japanese machinery orders.
Chinese trade figures highlighted again the region's dependence on Western consumers. Exports in February plunged 25.7 percent from a year earlier, worse than January's 17.5 percent decline, according to customs data. That adds pressure on Beijing to move quickly to carry out a multibillion-dollar stimulus package aimed at pumping up the world's third-largest economy.
"Exports will get worse before they get better. We could see contractions of up to 30 percent," said Royal Bank of Scotland economist Ben Simpfendorfer. "I do think the economy will struggle to bounce back."
The collapse in global demand has battered export-driven Asia, forcing employers to slash output and jobs in China, Japan, South Korea and other economies.
China's imports fell by 24.1 percent, less than January's stunning 43 percent plunge but still a blow to its trading partners, especially other Asian nations that supply its export industries with components and raw materials. The commerce minister warned Tuesday the slump is unlikely to end soon, saying trade will be a "grim picture" in coming months.
"The export figure is set to stay in the red so long as the major economies around the world remain in recession," Moody's Economy.com analyst Sherman Chan said in a report.
China's trade surplus narrowed to US$4.8 billion in February as exports fell to US$64.8 billion and imports dropped to US$60 billion. Its politically sensitive trade gaps with the United States and Europe also shrank.
The collapse in global demand for Chinese toys, shoes and other goods has thrown 20 million migrants out of work. Leaders worry that more layoffs could spark unrest and are promising to spend heavily to create jobs.
In a positive sign for China, sales of domestically made vehicles rose 25 percent in February from a year earlier to 827,600 units, following a tax cut on smaller cars, the China Association of Automobile Manufacturers reported.
"The forecast is that the situation in March will be even better than February," an official of the industry group told the official Shanghai Securities News newspaper.
Also yesterday, China's government said spending on factories and other fixed assets picked up in January and February, rising by 26.5 percent as its stimulus sparked a jump in investments by state companies.