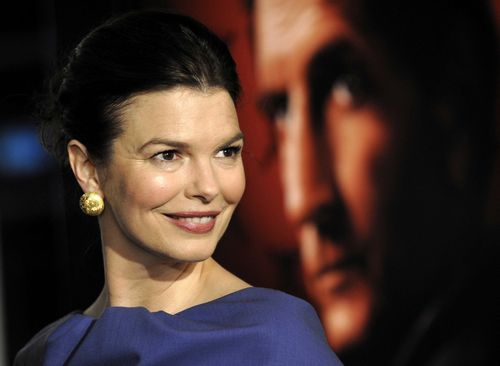 HBO on Tuesday defended its plans to depict a sacred Mormon temple ceremony in an upcoming episode of "Big Love."
The drama about a Utah polygamous family will show an endowment ceremony in the episode airing Sunday.
HBO said it did not intend to be disrespectful of The Church of Jesus Christ of Latter-day Saints and apologized.
"Obviously, it was not our intention to do anything disrespectful to the church, but to those who may be offended, we offer our sincere apology," the cable television channel said in a statement issued Tuesday.
But the ceremony is an important part of the "Big Love" story line, HBO said.
In the scene, actress Jeanne Tripplehorn's character, Barb, goes through the endowment ceremony as she faces losing her membership in the Mormon church.
On Monday, Mormon church leaders criticized HBO for its decision to include the ceremony and said airing the material shows the insensitivity of the network's writers, producers and executives.
"Certainly church members are offended when their most sacred practices are misrepresented or presented without context or understanding," the church statement said.
Only church members in good standing can enter temples to perform or witness sacred ceremonies. The ceremonies are centered on religious teachings and re-enactments of Bible stories to help Mormons prepare an eternal place for themselves - and others by proxy - in heaven.
Members take a vow not to discuss the rituals outside temple walls, although details of the ceremonies are widely available on the Internet.
The dramatization of the ceremony was vetted for accuracy by an adviser familiar with temple ceremonies who was on set during filming, said series creators and executives producers Mark V. Olsen and Will Scheffer.
"In approaching the dramatization of the endowment ceremony, we knew we had a responsibility to be completely accurate and to show the ceremony in the proper context and with respect," Olsen and Scheffer said in a separate statement issued through HBO. "We therefore took great pains to depict the ceremony with the dignity and reverence it is due."
News of the episode has sparked an online campaign by individual Latter-day Saints, who are calling for a boycott of "Big Love" and cancellation of subscriptions to HBO, AOL and other Time Warner Inc.-owned entities.
The church itself has not called for a boycott and said in its statement that doing so would just fuel controversy and interest in the program. Church leaders also said members of the rapidly growing faith should not feel defensive about HBO's characterization of Mormons.
"There is no evidence that extreme misrepresentations in the media that appeal only to a narrow audience have any long term negative effect on the church," they said in the statement.
"Big Love" is in its third season on HBO and a fourth is in the works. The program tells the story of Bill Hendrickson, a fundamentalist (played by Bill Paxton) who runs a chain of hardware stores and lives with three wives (Tripplehorn, Chloe Sevigny and Ginnifer Goodwin) in a Salt Lake City suburb.
Like Utah's real-life fundamentalists, the Hendricksons' beliefs are tied to the early teachings of Mormon church founder Joseph Smith, who said polygamy was an essential doctrine for exaltation in the afterlife. The church ultimately abandoned the practice in 1890 as a condition of Utah's statehood.
When "Big Love" first aired, negotiations between the church and HBO resulted in a one-time disclaimer included in the show's credits that distinguished the modern church's position on polygamy from the beliefs of the fictional characters in the series.
This season, however, the show's polygamy-focused stories have included more mainstream Mormon references. The program references events from Mormon history and the Hendricksons take a family vacation to upstate New York for the Hill Cumorah Pageant, a reenactment of stories from the Book of Mormon.
"Despite earlier assurances from HBO, it once again blurs the distinction between The Church of Jesus Christ of Latter-day Saints and the show's fictional non-Mormon characters and their practices," the church statement said.
HBO contends that throughout its three-year run writers and producers of "Big Love" have continued to make a clear "distinction between the LDS church and those extreme fringe groups who practice polygamy."