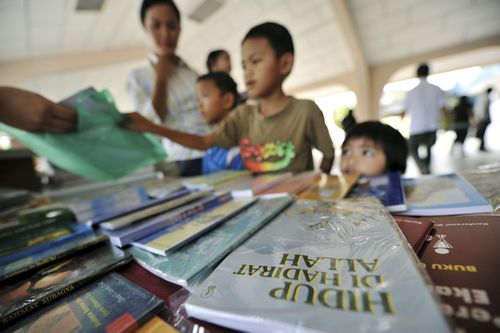 Reciting the Catholic Creed, the 1,800-strong congregation attending mass at St. Francis Xavier Cathedral on Borneo island intones in Malay: "We believe in one Lord, Jesus Christ, the only Son of Allah."
These Malaysian Catholics, like their brethren in Indonesia, have used the word "Allah" in place of "God" since converting to Christianity in the 19th century.
But now the government in this mostly Muslim Southeast Asian nation of 27 million people wants to prevent "Allah" being used by Christians, saying it is subversive and aims to convert Muslims.
Christians fear this is just the thin edge of the wedge.
"The government of West Malaysia has an infection of religious hatred. We have to fight back so it does not spread," said Bishop Cornelius Piong after Sunday Mass at the cathedral in the heart of a rice-growing district in eastern Sabah state.
Christianity is practiced by 9.1 percent of the Malaysian population, according to the 2000 census, the most recently available figures. Many of them, like Bishop Piong, come from ethnic groups such as the Kadazandusun, Dayaks, Ibans and Bidayuh who live in the Borneo states of Sabah and Sarawak.
"Our worship of Allah is so natural, it is part and parcel of the Kadazandusun people here," Piong said.
The row over the use of Allah to describe the Christian God feeds into a long-running feud over conversions between the government of a country where all Malays must be Muslims and other faiths, such as Hinduism and Buddhism that are practiced by ethnic Indians and Chinese.
It is illegal in Malaysia to convert from Islam to any other religion although conversions to Islam are allowed.
One of the biggest cases involved Lina Joy, a woman who wanted to convert to Christianity to marry her partner, who was baptized and applied to have her conversion legally recognized by the Malaysian state.
She lost a court battle two years ago to have the word "Islam" removed from her identity card. All Malaysian identity cards carry a person's race and religion.
It is cases such as these that worry Malaysian Muslim activists and officials and they see using the word Allah in Christian publications including bibles as attempts to proselytize.
Those concerns led to the ban on the Catholic Herald newspaper's use of "Allah" to denote God. The Herald is now suing the government to overturn the ruling, made after it appeared the paper would be allowed to use "Allah" provided it stamped "For Christians" on the front page of the paper.
"Allowing Christians to use the word is dangerous because it's attacking the sole religion of the Malays," said Yusri Mohamad, president of the influential Muslim Youth Movement. "We have to question Christians' motive for wanting to use this obviously Muslim word. It appears to be for conversions. All Muslim Malays in Malaysia are against this."
Some leading Muslim scholars here say the issue is being blown out of proportion and that the risk of conversions among the 60 percent Muslim population is tiny.
They see it as an attempt by the government that has ruled Malaysia uninterrupted for 51 years since independence from Britain to hold on to power by identifying ethnicity with religion.
The main ruling party in Malaysia is called the United Malay National organization, and like its allies from Chinese and Indian parties, it is ethnically based.
"It is an irrational fear (of conversions) but a very powerful one," said Osman Bakar, the deputy head of the International Institute of Advanced Islamic Studies Malaysia. "Now the government has moved to setting up demarcations around the national language."