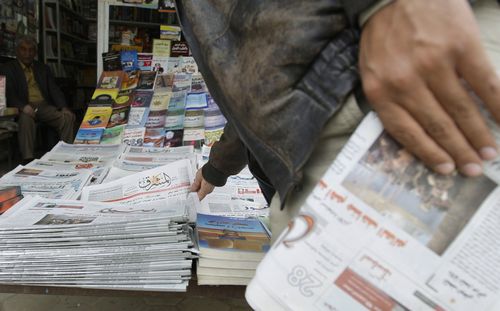 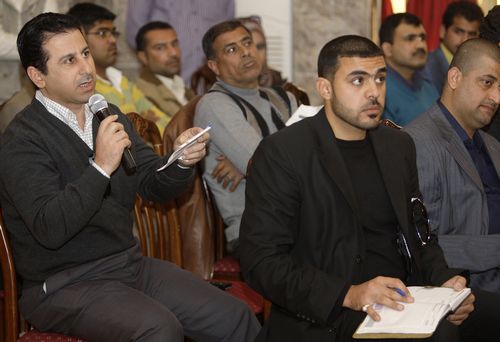 A boom in local media since the U.S.-led invasion in 2003 has given Iraqis a choice between some 200 print outlets, 60 radio stations and 30 TV channels in Arabic, Turkmen, Syriac and two Kurdish dialects.
Yet most media outlets remain dominated by sectarian and party patrons who use them for their own ends, and have yet to become commercially sustainable enterprises let alone watchdogs keeping government under scrutiny, the favored Western model.
"The media is part of Iraq's new democratic environment, and it carries the same traits and the same flaws," said Abdulzahraa Zaki, a senior editor at al-Mada, an independent newspaper.
Six years ago, Iraqis opening the morning newspaper found Saddam Hussein's face splashed across the front page day after day, and TV channels offered little more than the martial leader's interminable speeches.
Today, newsstands hawk dozens of papers and the airwaves are packed with channels. After the fall of Saddam's controlling regime and as security improves after years of sectarian and insurgent bloodshed, journalists are able to report more freely.
But reporters are still constrained by a system where most media outlets are at least partly funded by powerful political parties that set their editorial tone and decide what to cover.
"The real problem here is that all sides will be practicing self-censorship on issues relating to their own direct interests," said Ammar al-Shahbander, who heads the Baghdad office of the Institute for War and Peace Reporting.
Take al-Furat, a channel backed by the powerful Shi'ite religious party, the Supreme Islamic Iraqi Council (ISCI), as an example. In the run-up to recent local elections, party officials got hours of air time to promote their messages.
Such channels play up stories making political opponents look weak and play down their bosses' own mistakes.
Ali Khasbak, editor of a daily newspaper owned by Iraq's former interim prime minister, secular Shi'ite Iyad Allawi, said his journalists discuss perceived problems in Allawi's party - but such views don't make it into print.
Journalists for rent?
Iraq is just catching on to online reporting. Many Iraqi newspapers have websites, but internet usage is still low, with 275,000 users and 15,000 subscribers in a nation of 28 million in 2007, according to one recent U.S. report.
Young men who crowd internet cafes mostly do so to chat or find dates. Local blogs that do exist, such as Shalash al-Iraqi (http://shalashaliraqi.blogspot.com/2006/06/blog-post.html) on life, security and politics, are not widely read.
Embracing advertising as an alternative to party funding, which will be key for independent papers, has been hindered by the moribund state of Iraq's economy outside the oil sector.
But because party patronage ebbs and flows according to the political calendar, Shahbander said media must wean themselves from this dependency before they can embrace a sustainable business model - and become a robust check on power.
"If the media market is not straightened out, is not professionalized, then I think Iraq's chances of further democratic development will be more difficult and will take much more time than one would wish," he said.
For years, the Saddam government made sure that journalists who dared to speak ill of it met with imprisonment or death.
Today, Prime Minister Nuri al-Maliki, who is growing in strength and stature ahead of national elections late this year, is seen as generally supportive of a free media, as enshrined in Iraq's new constitution.
Last year, the government set up a hotline for journalists facing threats in a country that ranks as the most dangerous in the world for reporters. It now allows them to carry guns.
When local media complained of the rough treatment by prime ministerial guards of TV reporter Muntazer al-Zaidi after he threw his shoes at then President George W. Bush, Maliki invited journalists to his office in an attempt to cool tempers.
"Definitely we're not afraid. We write articles against the prime minister, against the security agencies," Zaki said.
"There has been no backlash from the government against any Iraqi news organization - despite harsh criticism and even untrue allegations" against the government, he said.
In a part of the world where many leaders habitually stamp out dissent, Iraqi reporters have something to be grateful for, said Muayyad Allami, head of Iraq's journalist union.
"We now have more freedom than Arab colleagues do and it's perhaps even better than some parts of Europe," he said.
That may be exaggerated. There are many reports of pressure and attempts to bribe reporters, and both U.S. and Iraqi forces have stopped journalists doing their jobs.
More troubling is semi-autonomous Kurdistan, where libel is a criminal offense and reporters censor themselves heavily out of fear of the two political parties that dominate the region.
A recent U.S. government human rights study reported harassment and jailing by Kurdish security forces of critical journalists and a "marked increase" in intimidation.
Iraq remains a dangerous place. Over 135 media workers have been killed since the war began.
Mohammed Nassir, a senior editor at Alsumaria TV, which is owned by a Lebanese businessman, described his philosophy. "There are three kinds of dogs: the lap dog, the attack dog, and the watchdog. We must be a watchdog," he said.
But most Iraqi reporters are new to the craft, and investigative reporting, the kind that can ferret out corruption and crime, is still in its infancy.
"Journalists are still in the process of understanding what their role is in a democratic society," said one U.S. official in Baghdad.
Journalists complain that new, progressive media laws are needed before the press can operate without fear. A new law has been drafted but is held up by a logjam in parliament.
For some journalists, it places too many obstacles in the way of journalism. "The proposed law protects the government from journalists, rather than the other way round," Nassir said.