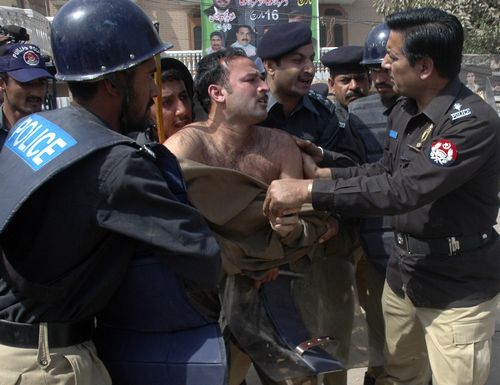 Pakistan yesterday arrested dozens of political activists and lawyers in a bid to thwart a nationwide demonstration as protesters vowed to defy the clampdown and march on the capital.
Organizers hope tens - if not hundreds - of thousands of lawyers, opposition party members and civil society activists will join a four-day protest march to Islamabad, which begins today in the southern city of Karachi.
They are demanding that the hugely unpopular President Asif Ali Zardari act on promises to reinstate judges, including supreme court chief justice Iftikhar Muhammad Chaudhry, sacked by ex-military ruler Pervez Musharraf.
Zardari is locked in a showdown with the country's most popular opposition leader, former prime minister Nawaz Sharif, who has joined forces with the lawyers and who was last month disqualified from contesting elections.
Similar protests after Musharraf declared emergency rule in 2007 ultimately led to his resignation, paving the way for general elections and leading to hopes that a new civilian government would restore law and order.
But a year after a parliamentary vote and six months after Zardari became president, the country is battling economic meltdown, racked with political crisis and unable to curb Taliban and al-Qaeda-linked violence.
Authorities rounded up dozens of "miscreants" and invoked a 19th century British law banning protests in the country's two biggest cities, Karachi and Lahore, and their respective provinces of Sindh and Punjab.
Thirty five people, including members of Sharif's Pakistan Muslim League-N (PML-N) were detained in Islamabad, a senior police officer said.
Many lawyers and MPs have gone into hiding to avoid detention, and were unreachable by telephone at their homes and offices.
In Lahore, the capital of Punjab province and Sharif's political heartland, police confirmed further arrests.
"Raids are being conducted at various places in the city and some arrests have been made," senior police official Amjad Saleemi said.
A government official said he expected "hundreds of people" to be rounded up before the march and that lists of "miscreants" were being prepared in districts across Punjab province. Opposition party activists said dozens of workers were arrested in Lahore and Multan, although there was no confirmation on numbers from police.
Prominent lawyer and former interior minister, Aitzaz Ahsan, vowed that the so-called "long march" would be held despite the ban.
"Tomorrow I will join the lawyers' rally in Lahore and defy Section 144," Ahsan said referring to the 1898 British law banning rallies and protests.
"On March 16, it will be the test of the government when a sea of people enter Islamabad," he said.
In Punjab, the authorities ordered the paramilitary Rangers unit on alert late Tuesday and police in Karachi said they were braced for possible trouble.
"If needed the army would also be called in to maintain calm," a senior home department official said. "Police have been asked not to allow anyone to disturb peace," Karachi police chief Waseem Ahmed said.
The government has threatened Sharif with charges of sedition for inciting rebellion after the supreme court on Feb. 25 barred him from office. Analysts said the government's decision to clamp down on the march by outlawing protests and conducting mass arrests - rather than allow the protest to be conducted - underscored its skittishness.
"It is a sign of nervousness," a former chief of Pakistan's powerful military Inter-Service Intelligence, Hameed Gul, said.
"It is not in the interest of anyone. If Pakistan goes into turmoil, it will affect Afghanistan and India. It would be the kind of a mess the entire region will plunge into."