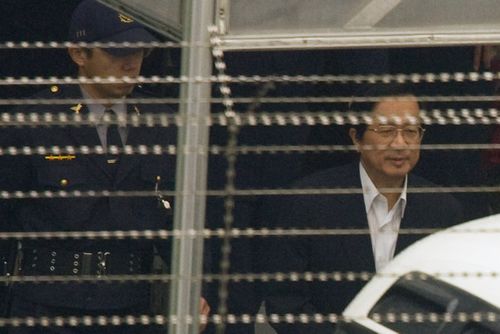 Hon Hai Precision Industries chairman Terry Gou, one of the country's wealthiest businessmen, denied yesterday he had ever donated money to former first lady Wu Shu-jen.
Gou's name featured on a list of 20 prominent businessmen Wu handed to prosecutors in the investigation into corruption and money laundering by her family.
The entrepreneur had given NT$30 million and diamonds to Wu, according to media reports.
"I have never in my life met Wu Shu-jen," Gou told reporters as he left the prosecutors' offices. He said he had told the investigators all he knew about the case. Prosecutors have been interviewing several business leaders featured on the list over the past week. Several of them told reporters the allegations were completely false.
Yesterday morning, Jih Sun Financial Holdings chairman Chen Kuo-ho acknowledged his wife had donated NT$20 million of her own money to Wu, media said, though he did not speak to reporters.
Prosecutors have been investigating allegations that major financial groups made illegal payments to the former first family in return for the go-ahead for takeovers and mergers under the previous administration's financial reform program.
Wu's husband, former President Chen Shui-bian, appeared at the Taipei District Court for the latest in a series of pre-trial sessions yesterday. He has been in custody as a suspect since Dec. 30.
During the hearing, Chen and his attorneys presented a list of 34 defendants, witnesses and other people he wanted to be confronted with during the trial, reports said. The list includes his own son, Chen Chih-chung, who has also been indicted for money laundering, prominent businessmen and former top government leaders including ex-President Lee Teng-hui and former Vice President Lien Chan, media reports said.
Chen's attorneys have repeatedly filed motions against his detention and thrown doubt on the validity of the interrogations by prosecutors.