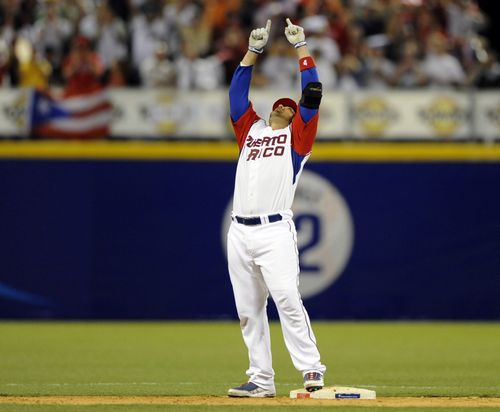 Puerto Rico edged upstart Netherlands 3-1 to reach the second round of the World Baseball Classic, a 16-team tournament that nearly has become a humiliation for teams full of Major League Baseball talent.
The Dutch beat powerful Dominican Republic 3-2 in their opener and were five outs away from another shock to advance in the double-elimination event before Yadier Molina's two-run double put Puerto Rico ahead to stay at San Juan.
"It's one of the greatest moments of my life. The double that I hit tonight is going to be in my heart all my life," said Molina, who helped St. Louis win the 2006 World Series. "This is my World Series and I enjoy it more here."
Defending champion Japan and runner-up Cuba, who had only two elite U.S. stars between them in the 2006 inaugural Classic final, proved that it doesn't take full millionaire sides such as the Americans can boast to be impressive.
Just ask Italian manager Marco Mazzieri, whose squad ousted host Canada 6-2 on Monday at Toronto.
"When you have major league people first and major league players second, that's what's going to happen and that's what we have," he said.
Canadian first baseman Justin Morneau learned that the hard way.
"We came in expecting to win this game," he said. "We should have won on paper but you don't play on paper. We didn't get any big hits. It's a tough loss. It's one of those things that will probably stick with us for a while."
Also exiting was South Africa, a 14-3 loser to host Mexico in an elimination game despite staying within 3-2 after six innings and bringing the go-ahead run to the plate in the seventh.
Not so bad for a nation yet to produce a major leaguer facing a hotbed.
Puerto Rico joined the United States in reaching Miami's second-round group that opens Saturday. Tuesday's Italy-Venezuela winner at Toronto and the winner of the Dutch rematch of a with the Dominicans will also advance to Miami.
"From what I understand, they're supposed to beat us 9-0," Dutch manager Rod Delmonico said. "We'll come out and play like we have in the first two games."
South Korea and Japan are already qualified for the other second-round group at San Diego, to be joined by Tuesday's Cuba-Australia winner at Mexico City and the winner of that loser's Wednesday test against Mexico.
The Aussies shocked Mexico in their opener by winning on the 10-run mercy blowout rule to book a rematch of the 2004 Olympic final they lost to Cuba, seeking to reach a global event final for the 39th time in a row.
Randall Simon, who played eight US major league seasons, predicted a repeat Dutch defeat of the Dominicans after fighting Puerto Rico to the finish.
"They are star players and we never moved back," said Simon, one of 12 Curacao-born Dutch players. "We have a great team. We trust we have a chance to go to the second round. We are going to do it."
At Toronto, Italian outfielder Chris Denorfia went 4-for-4 with three doubles, driving in two runs and scoring two more to match Classic record for total hits and doubles in a single game.
"Heck of a performance. It was the boost we needed," Italy's Jason Grilli said. "We've got a lot of heart. These guys play hard. They are trying to get to the big leagues too."
An unfancied side with Denorfia among the few major leaguers will challenge a Venezuelan club that bounced them into the loser's bracket 7-0 in the opener.
"It was a team win. These guys have a lot of pride," Denorfia said. "I'm really excited. I would not count us out."
Neither would Canadian manager Ernie Whitt.
"Tip your hat to Italy. They shut down a very powerful team," Whitt said. "We definitely expected to score more than two runs."
To say Canada was confident was an understatement.
"It's the most disappointing and emotional loss I've ever suffered," said Canada's Joey Votto. "It's going to take a long time to get over it."