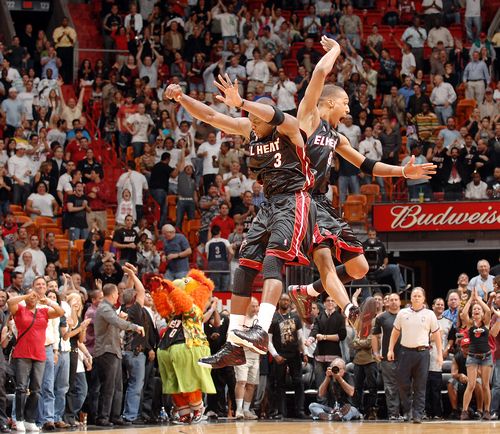 Dwyane Wade stole the ball from John Salmons with 4 seconds left, then made a running 3-pointer as time expired to lift the Miami Heat to a 130-127 double-overtime win over the Chicago Bulls on Monday.
Wade - who finished with 48 points and 12 assists in 49 minutes, shooting 15-for-21 from the field - made a 3-pointer at the end of the first half, then again at the end of regulation.
And after missing a layup at the end of the first extra session, he more than atoned for that at the end.
Referees reviewed the play for more than two minutes, before Mark Wunderlich shot his hands in the air, officially giving Miami the win.
Michael Beasley had 18 points, Mario Chalmers added 17 and Jamario Moon scored 13 for the Heat, who stayed within 1.5 games of Atlanta for the No. 4 spot in the Eastern Conference playoff chase.
Ben Gordon scored a season-high 43 points for the Bulls, including eight 3-pointers.
Trail Blazers 111, Lakers 94: At Portland, Oregon, Brandon Roy scored 27 points as Portland defeated Los Angeles in a game marred by the Trail Blazers' Rudy Fernandez being carried off the court on a stretcher after a hard foul. Fernandez, a rookie from Spain, was hurt late in the third quarter when he was fouled by Trevor Ariza while going up for a shot. He was carried from the court on a stretcher with his neck in a brace.
Fernandez was conscious and alert when he left the court, and he had full movement of his extremities, the team said. But he was experiencing chest pain and was taken to a hospital.
Travis Outlaw added 22 points for the Blazers, who have won 12 straight at the Rose Garden.
Kobe Bryant had 26 points for the Lakers, who haven't won at the Rose Garden in their last seven tries, with their last victory on Feb. 23, 2005.
Hawks 89, Hornets 79: At Atlanta, Joe Johnson scored 30 points as Atlanta beat New Orleans to end the Hornets' season-best seven-game winning streak.
Johnson had only 12 points in back-to-back games and was held under 20 points in four straight before re-emerging against the Hornets. He had 10 points in the third quarter and helped the Hawks protect the lead in the final period.
Johnson's 30 points are his most since a season-high 41 against Chicago on Dec. 27.
Chris Paul had 24 points and 10 assists, and David West added 16 points and 20 rebounds for New Orleans.
Wizards 110, Timberwolves 99: At Minneapolis, Caron Butler had 27 points, 10 rebounds and six assists to lead Washington over Minnesota in a matchup of teams that had lost 14 straight combined.
Antawn Jamison added 26 points for the Wizards, who had lost five in a row and seven of their last eight.
Kevin Love had 16 points and 11 rebounds and Ryan Gomes scored 18 for the Timberwolves, who have lost 10 in a row and 15 of their last 16.
And the news may only be getting worse. Guard Randy Foye had to be carried to the locker room in the fourth quarter with a sprained right ankle. He went up to grab a high lob pass from Mike Miller, but crumpled to the court in pain.
Pistons 98, Magic 94: At Auburn Hills, Michigan, Richard Hamilton scored 29 points and had a career-high 14 assists as Detroit beat Orlando. Detroit, already without Allen Iverson (back) for the sixth straight game, lost Rasheed Wallace to a calf injury late in the first quarter. Antonio McDyess, though, added 13 points and 18 rebounds to help the Pistons finish off a 3-0 season sweep of the Magic .
In the other game it was Rockets 97, Nuggets 95