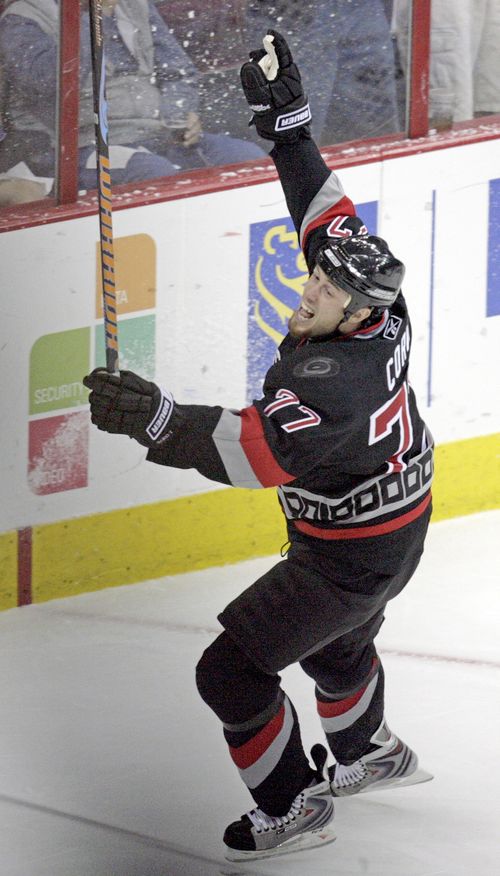 Cam Ward stopped 28 shots in his fifth shutout of the season as the Carolina Hurricanes beat the New York Rangers 3-0 on Monday to match a season high with their fourth straight victory.
Joe Corvo and Rod Brind'Amour scored, and Tuomo Ruutu added an empty-netter for the Hurricanes.
Carolina jumped from ninth in the Eastern Conference into a tie for fifth with Montreal with 77 points in the crowded playoff chase. The Hurricanes have won eight of 10.
The Rangers had their three-game winning streak snapped and dropped out of a playoff position for the first time this season.
Senators 2, Maple Leafs 1: At Ottawa, Daniel Alfredsson and Dany Heatley scored second-period goals as Ottawa beat Toronto.
Brian Elliott made 25 saves in his third straight start for Ottawa, which won all of those games.
Ian White scored in the first period for Toronto, which lost in regulation for the second straight game after earning at least a point in its eight previous games (6-0-2).
Maple Leafs veteran Curtis Joseph became the sixth goalie in league history to allow 2,500 goals on Alfredsson's score, an unassisted effort in the second period that tied it at 1.
He joined John Vanbiesbrouck, Tony Esposito, Grant Fuhr, Patrick Roy and Gilles Meloche, who allowed an NHL record 2,756 goals.
Kings 3, Canucks 2: At Los Angeles, Jarret Stoll scored twice during power plays and Teddy Purcell had two assists as Los Angeles edged Vancouver.
Defenseman Denis Gauthier also scored and Jonathan Quick made 20 saves, helping end Vancouver's four-game winning streak and handing the Canucks just their third loss in 15 games. Los Angeles has scored at least one power-play goal in 19 of its last 22 games, and two or more in seven of those contests.
Roberto Luongo allowed more than two goals for the first time in eight starts, stopping 19 shots. He won 12 of his previous 13 after losing his first five games following return from an injury that sidelined him for 24 games. Alex Burrows and Taylor Pyatt scored Vancouver's goals.