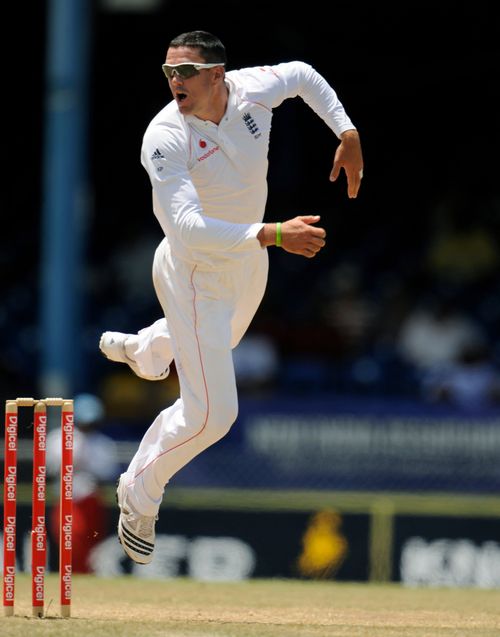 Centuries by West Indies pair Shivnarine Chanderpaul and Brendan Nash frustrated England on Monday as the fifth and final test seemed to be heading for a draw in Trinidad.
The home team were bowled out for 544, a first-innings deficit of two runs, before England reached 80 for three at the close of play on day four.
The visitors, 1-0 down in the series, must now gamble and push for quick runs on Tuesday morning before attempting to bowl out West Indies in around 50 overs, a difficult task on a wicket that has offered little help to the bowlers.
"You never know," England spinner Graeme Swann told reporters. "I think we've toiled hard in this series.
"We haven't had a great deal to show for it and probably feel we are due a magic session. Hopefully it comes tomorrow."
The Australian-born Nash (109) hit his maiden test century while Chanderpaul (147 not out) chalked up his 21st test ton.
The pair put on 234 for the fifth wicket before Nash was caught by a diving Paul Collingwood at slip off Stuart Broad.
Chanderpaul was then involved in controversy on 92.
Umpire Daryl Harper gave the left-hander out caught behind off Swann but Chanderpaul referred the decision to the video umpire and, after a long delay, was deemed not out.
West Indies captain Chris Gayle, who retired hurt on 100 on Sunday, returned to the crease with a runner after the loss of the eighth wicket but added two runs before he was superbly caught by counterpart Andrew Strauss off Swann.
Playing their shots
However, Gayle's hamstring injury is likely to keep him out for the start of the one-day series.
Broad and Swann picked up three wickets apiece but the pick of the attack was James Anderson, who toiled hard and bowled a tight line despite claiming only one wicket.
England conceded 74 extras, the second highest in a test innings after India gave away 76 against Pakistan in Bangalore in 2007.
Given the situation in the series, England's batsmen looked to play their shots and soon lost Strauss for 14, caught and bowled by Gayle who ignored his injury to bowl the fifth over of the second innings.
Owais Shah was then caught behind off seamer Lionel Baker for one before Alastair Cook (24) fell in identical fashion to spinner Ryan Hinds before the close.
Kevin Pietersen's unbeaten 34 from 27 balls was precisely what England needed towards the end of the day and they need more of his aggressive strokeplay if they are to have any chance of forcing victory.