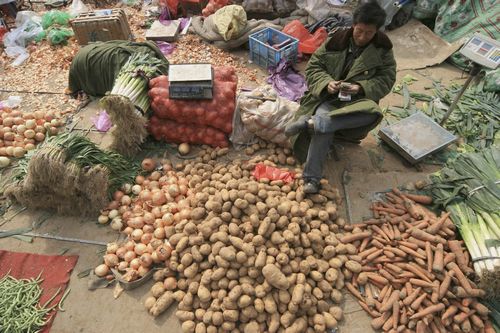 China yesterday reported its first drop in consumer prices in more than six years, adding to worries about how the world's third-largest economy is weathering the global slowdown.
With the cost of food, clothing and fuel declining, the consumer price index - the main gauge of inflation - dropped 1.6 percent in February from a year earlier, the first such fall since December 2002.
Chinese Premier Wen Jiabao said last week that he expected the country to meet a target of eight percent growth this year, but the spectre of deflation could put that goal at risk, analysts say.
Price falls raise concern about a cycle of deflation as consumers put off major purchases, expecting costs to keep going down. The slowdown in sales pushes prices down further, making growth that much harder to achieve.
"Sustained price declines are concerning to policy-makers because deflationary expectations often lead consumers to defer purchases, resulting in further downward price pressure," said Jing Ulrich, an analyst with JP Morgan.
In the first two months of the year the consumer price index was down 0.3 percent from the same period in 2008, the national statistics bureau said.
The State Information center, a government think-tank, forecast that the consumer price index would fall one percent in the first quarter.
"It's natural as the price of everything, including oil and foods, is falling," said Ren Xianfang, a Beijing-based analyst with research firm Global Insight. "It's a reflection of the global deflation."
The government has outlined a massive stimulus package and instituted a series of central bank interest rate cuts in order to boost the economy.
The Chinese economy, which is heavily dependent on exports, has seen growth slow as demand weakens because of the worldwide recession.
In the fourth quarter of last year, it expanded by just 6.8 percent - well below the eight percent that China's policy planners believe is the minimum needed to avert widescale unemployment that could trigger mass social unrest.
Overall growth in 2008 was nine percent - the first time since 2002 that growth was in single digits.
The statistics bureau said producer prices, an indicator of trends at the wholesale level, were down 4.5 percent in February from a year earlier.
Analysts said the case for further interest rate cuts was becoming stronger.
"For an average middle-class household, the habit of saving still outshines any temptation to spend," said Sherman Chan, an analyst with Moody's Economist.com, in a research note.
"The central bank needs to cut interest rates now so that the incentives to save will diminish," she said.
Su Ning, a vice governor of the central bank, was quoted as saying Monday that China had room for further interest rate cuts and other measures to help weather the global crisis.
China has cut interest rates five times since September last year, most recently on Dec. 23.